The Irish Times view on the Special Criminal Court: An admission of the State’s failures 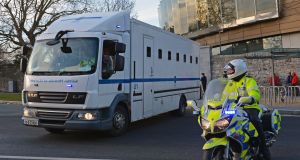 The non-jury Special Criminal Court, presided over by a panel of three judges, was, in its modern guise, established in 1972 in order to try cases linked to the Troubles in Northern Ireland. Photograph: Eric Luke

The existence of the Special Criminal Court should trouble anyone who believes in civil liberties. The non-jury court was, in its modern guise, established in 1972 in order to try cases linked to the Troubles in Northern Ireland. As a response to the extraordinary violence of the period, the court was a radical step – and a temporary one. Yet almost half a century later, the court has become a fixture of the legal system. Its focus on organised crime, which dates from the murder of journalist Veronica Guerin in 1996, has meant that despite the decline in terrorism on the island over the past three decades, “the special” is now virtually the automatic option when alleged gang members are to be tried.

Sinn Féin’s call for the abolition of the court is hard to separate from the fact that it was the vehicle through which the party’s allies in the IRA were jailed through the 1970s and 1980s. Yet opposition to the court extends far beyond those who are compromised by such links. By operating without a jury and accepting secret evidence from gardaí, the court breaks with some of the principles we assume are intrinsic to the right to a fair trial. Nobody who takes human rights seriously can be entirely comfortable with that.

The question is whether it is possible to design an alternative that would protect juries and witnesses from intimidation (and worse), guarantee defendants the right to a fair trial and reassure the community that those who commit the most serious crimes can be brought to justice. The Constitution allows for special courts where “it may be determined . . . that the ordinary courts are inadequate to secure the effective administration of justice”. Successive governments have argued that those ordinary courts cannot deal with the unique threats the State and its citizens face from organised crime gangs. They have pointed to the dangerous criminals who have been jailed thanks to the court. It’s a persuasive argument, and the public appears to accept it. An Irish Times/MRBI opinion poll in 2016 found that two-thirds of voters approved of retaining the court.

But while the case for the court’s existence may be strong in circumstances where ordinary courts offer so few comparable protections, that’s not an argument for living permanently with this emergency-era institution. In effect, every day, by sending cases to the Special Criminal Court, the State concedes that its courts are incapable of dealing with serious crime. That’s not good enough. Technology, remote participation and other special protections could certainly help. At the very least, the Government must show that it is exploring alternatives.

The Special Criminal Court is an admission of failure. It may be necessary while those failures persist, but in the long-term the solution must be to design a court system that can deal with the realities of crime in the 21st century.

5 Joe Biden’s presidential inauguration: Where can I watch, and what are the key moments?