The Irish Times view on government economic plans: The long shadow of the pandemic

The priorities have been set by the programme, but key decisions remain to be made on how the goals which have been set will be met and, in the long term, how they will be paid for 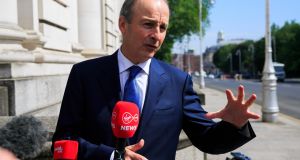 The draft programme for government leaves much to be decided when it comes to drawing up the budget for 2021 and the national economic programme for the years ahead. The priorities have been set by the programme, but key decisions remain to be made on how the goals which have been set will be met and, in the long term, how they will be paid for.

The aspirational nature of the programme was, perhaps, inevitable, given the uncertainty caused by the Covid-19 crisis. As the economy opens up, a vital few months lie ahead to see whether the virus will remain under control. Further total lockdowns may not be in prospect, but the path of the virus will affect public confidence and the consumer-facing parts of the economy. In turn this will frame the outlook for the budget and the new economic plan.

Planning against such uncertainty is very difficult, particularly as this is so important for the public finances. If it does take office, the new government will face a busy and potentially fraught period deciding what is achievable in its first few years in office and how to frame the national economic plan. The programme identifies some key areas – environmental projects, public transport, housing and health. As ever, delivering improvements will be the challenge and the hole the crisis has put in the public finances will not help.

Still, a potential path is becoming clear. The new government would plan a stimulus in July, including legislation for measures already promised, and then in October it would frame plans for the next couple of years. The initial drive to get the economy going would involve significant borrowing beyond what is already planned. Beyond that there is a commitment, in time, to reduce the deficit and move to a “ broadly” balanced budget.

Financing the stimulus programme will depend, crucially, on borrowing rates remaining low for the State on world markets. With the European Central Bank committing to staying in the market until the middle of 2021 at least, there is a good chance that this will be the case. Further out, however, the outlook is less certain.

As well as the stimulus programme and the Covid-19 response, the programme promises a range of other potentially expensive initiatives, though it is careful to generally avoid details or timelines. Nonetheless, improving State services in areas like health, childcare and public transport will not come cheap. At some stage, as the Irish Fiscal Advisory Council has made clear, consideration will have to be given to raising new revenues or saving money elsewhere to get the budget back on track and pay for new programmes.

Ideally, this budgetary correction would happen when the Covid-19 crisis is behind us and the economy is growing again. First, however, the government will have to deal with the crisis and its difficult economic aftermath.