The Irish Times view on the rule of law in Poland: A battle for the judiciary’s future 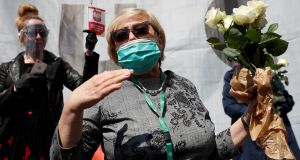 Malgorzata Gersdorf holds a flower bouquet as she speaks to her supporters during her last day as supreme court president in Warsaw this week. Photograph: Kacper Pempel/Reuters

As the embattled head of Poland’s supreme court, Malgorzata Gersdorf, retired last week at the end of her term, she gloomily responded to a question about whether Poland has become an authoritarian state: “Not yet, I hope, but we’re moving towards one fast”.

A tussle had already started over her replacement, with president Andrzej Duda moving to appoint former justice department official Kamil Zaradkiewicz. Gersdorf, who last year, backed by the Court of Justice of the EU (CJEU), refused to accept enforced early retirement, has fought hard to defend judicial independence from the Law and Justice Party (PiS) government. She insists her job should pass to the next most senior judge on the court.

Gersdorf also admits that she failed to get implemented an earlier CJEU order to disband the government’s controversial judicial appointments body. “Unfortunately, I have not been able to stop this process. I have not succeeded in preventing the destruction of the rule of law,” she says.

Meanwhile the European Commission has lodged its fourth rule-of-law case against Poland – this time over procedures that allow the sacking of judges for questioning aspects of PiS’s judicial overhaul, such as the legality of new judicial appointments. Dozens of judges have already been punished for their criticism.

And the pandemic has deepened fears that some European leaders will increase their control of state institutions and civil society, using social curbs introduced across the continent as cover. “We cannot compromise or put in lockdown our fundamental rights and values,” justice commissioner Vera Jourova told reporters in Brussels. “The virus must not kill democracy.”

Jourova had rightly raised concerns over Poland’s decision to press ahead with postal ballot presidential elections on May 10th. A number of senior opposition figures, including former EU Council president Donald Tusk, are calling for a boycott, as is the only female candidate, Malgorzata Kidawa-Blonska, who says the elections “breach the constitution”.

Political observers warn that turnout could be exceedingly low, perhaps as little as 30 per cent, strongly favouring the return of PiS ally Duda.

The Organisation for Security and Co-operation in Europe last Monday warned that the election Bill is incompatible with international standards of democratic elections. Similar concerns have also been expressed by the Council of Europe and the European Parliament.

PiS’s continued disregard for European political and rule-of-law standards is an important and worrying challenge to our common values. In fighting to uphold those values all Europeans owe a debt of gratitude to the courageous and principled Gersdorf.