The Irish Times view on EU-UK talks: A chasm that will be hard to bridge 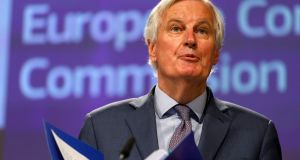 The resumption last week of EU-UK talks on their future relationship did not go well. The 40 video conferences involved EU chief negotiator Michel Barnier and his British counterpart David Frost, as well as technical discussions across all 11 negotiating groups. But only “limited progress was made” in a few areas, a UK spokesman said afterwards, while the EU expressed strong disappointment.

Time is running out, as Barnier keeps warning. He points to the June deadline for the UK to seek an extension beyond December’s talks cut-off and the end of transition. The UK has reiterated that it will not apply for an extension. In the interim only two rounds of negotiations are left: the weeks of May 11th and June 1st.

That tightening timeframe makes preparations for the UK’s no-deal departure all the more relevant; specifically in the Irish context, work on preparing customs procedures, sanitary and phytosanitary controls, as well as other regulatory checks for goods, foods and animals crossing the Irish Sea.

On Thursday the joint Specialised Committee on the Protocol on Ireland/Northern Ireland will meet for the first time, and, Barnier insists, must hear “clear evidence” that the UK is actually preparing the physical/administrative infrastructure for such checks. His warning that “the faithful and effective implementation of the withdrawal agreement is absolutely central to our ongoing negotiations” is unambiguous – progress in the future relationship talks is conditional on those controls being put in place in a timely way, whatever UK prime minister Boris Johnson may otherwise promise. There was a dreary familiarity to the post-talks assessments by both sides – arguments and positions well and truly vented, and settled, we thought, in the withdrawal agreement talks. But no, the UK insists it will not accept – has not accepted – the EU terms on level playing-field conditions. You didn’t force the Canadians, South Koreans or Japanese to accept these conditions, London claims, as its draft free-trade agreement cherrypicks its way through other treaties, citing them as precedents.

But the UK wants a bespoke deal with no tariffs and no quotas. Both its market’s scale and proximity make it entirely different, the EU responds. Brussels also rejects attempts to split and negotiate separately, sector by sector. One unified agreement is essential. “Parallelism”, sectoral talks progressing together in step, is the Brussels mantra.

Familiar arguments about governance of any agreement, and the role of the European Court of Justice, are back on the table, as is – to the surprise of many – suggestions that the UK does not want to commit permanently to the European Convention on Human Rights, an EU must. These are chasms that will be difficult if not impossible to bridge.