The Irish Times view on North Korea: reading the signals

If the world has little idea why Kim has vanished from public view, it knows even less about any succession plan the country may have in place 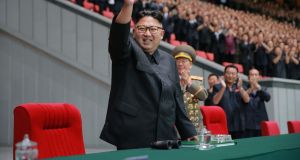 When the North Korean dictator Kim Jong-un failed to make an appearance at a key state holiday on April 15th, the network of global analysts who rely on such meagre public signals to interpret events in the secretive state took note. Kim has since remained out of sight, and with each passing day, rumours and speculation have intensified.

Reports that Kim has died or is severely ill have been dismissed in South Korea, which said there were no indications of anything unusual north of the 38th parallel. US authorities have also tried to downplay the rumours.

The frenzy of speculation is an indication of the regime’s success at keeping a veil of secrecy over its activities and the frustrations faced by foreign governments in monitoring the hermetic state. If the world has little idea why Kim has vanished from public view, it knows even less about any succession plan the country may have in place.

Given North Korea’s nuclear programme and its hostile posture towards its neighbours, Kim’s fate – and the identity of any possible successor – are questions that have a very significant bearing on regional and global security. Diplomatic efforts to persuade Pyongyang to give up its nuclear weapons have been stalled since February 2019, when a summit between Kim and US president Donald Trump collapsed without agreement. While Trump had given ground on longstanding US demands, the talks faltered over North Korea’s insistence it receive broad sanction relief in exchange for partial concessions on its arsenal.

In a sign that Pyongyang was again seeking to raise tensions, it fired a barrage of suspected cruise missiles off its east coast last month – the first time it has done so in three years. UN security council resolutions ban North Korea from engaging in ballistic activities, but not cruise missile tests. Kim has so far held to a moratorium on the testing of long-range missiles that could threaten the US. That suggests, in its carefully calibrated recent moves, Pyongyang is seeking to maintain tensions while retaining its leverage in any future negotiations.