The Irish Times view on Irish attitudes to the EU: a sense of ownership

People feel the EU should do better, but the crucial question is how? 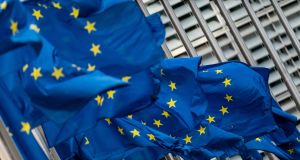 A poll of Irish voters found that 47 per cent express concern that their voice as citizens is not heard by Brussels; 33 per cent say that it is. Photograph: Kenzo Tribouillard/AFP via Getty Images

Public unease – and, in some states, downright unhappiness – over how the European Union is perceived as managing the coronavirus crisis is becoming an important political reality. In Italy in particular it has fuelled a new, destabilising wave of Euroscepticism.

In Ireland, a new poll, conducted for the European Movement by Red C at the end of March, finds the public evenly divided. Forty seven per cent agree that the EU has responded well, while 46 per cent do not agree.

So the EU should do better, but the crucial question is how? As leaders prepare to launch this year a Conference on the Future of the EU, the question needs to be refined: has the EU failed to mobilise effectively the very limited powers its members states have chosen to give it to coordinate healthcare?

Or is the lesson of the pandemic precisely that the union needs to be given such powers? As Francois Mitterrand would say, the solution to almost any problem is always “more Europe, more Europe”.

The new poll does not give a clear answer, but does have some pointers. Support for membership in a country which has consistently ranked, and remains, in the EU top three on this measure, is down nearly a tenth to 84 per cent on the year. And some 47 per cent express concern that their voice as citizens is not heard by Brussels; 33 per cent say that it is.

Irish voters badly want the EU to survive, but they need a sense of ownership. They are divided on giving Brussels more powers, for example on tax vetos, but want to participate in collective security (49 per cent are in favour and 31 per cent against) and approve of EU negotiating trade on the world stage. They are divided on expanding EU membership, and oppose taking in more refugees.

In most of these regards they are not so different from fellow Europeans . Depressingly, echoing reports from Brussels, the poll finds only 26 per cent believe that there will be an EU-UK Brexit trade deal agreed by the end of the year.