The Irish Times view on the Public Services Card: overstepping the mark

To avoid conflict with civil liberties groups, politicians opted instead for a gradual amalgamation of departmental databases, but without underpinning such a development in law 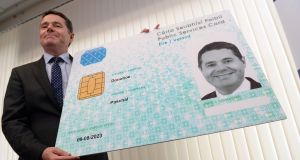 Minister for Public Expenditure and Reform Paschal Donohoe with a replica of his Public Services Card in 2016. Photograph: Eric Luke/The Irish Times

The State has come out with its hands up in relation to a requirement that citizens present a Public Services Card when applying for driving licences, passports or student grants. Taoiseach Leo Varadkar admitted that these matters, condemned by Data Protection Commissioner Helen Dixon, would “certainly require change”.

It should never have come to this. Two years ago, when controversy erupted over what Ms Dixon described as “mission creep” and the card was demanded as proof of identity when applying for a driving licence, action should have been taken. But Minister for Social Protection Regina Doherty chose obfuscation, describing production of the card for ancillary services as “mandatory, not compulsory”, before ploughing ahead. When the Data Commissioner began her investigation, some 3.2 million cards had been issued. The number may now exceed four million.

Publication of her 170-page report is awaited but, in the meantime, its findings are being carefully analysed within Government. Some key issues will have to be addressed: the expansion of the card, without a legal basis, to access other State services; the indefinite retention of the personal data provided by citizens and a lack of transparency in the scheme’s operation. In the past, there was broad political agreement that the card represented an effective anti-fraud device and should be publicly defended. In this instance, however, Fianna Fáil will not support legislation designed to address what was found to be illegal.

Already, departments affected by the ruling have begun to drop the requirement that applicants for their services must first secure a card. And amending Government legislation will have to ensure it does not contravene EU data-sharing laws. The tough, uncompromising views expressed by the Data Protection Commissioner in her report sets an interesting benchmark in relation to her examination of the activities of Google and Facebook and their use of customer data. Her findings on those issues could have major consequences. Compared to the demands by multinational companies for untrammelled – albeit voluntary – access to customer data in return for use of their services, the Public Services Card is in the ha’penny place.

Ireland is one of three EU states that does not issue national identity cards. To avoid conflict with civil liberties groups, politicians opted for a gradual amalgamation of departmental databases, but without underpinning it in law. The Public Services Card and the unlawful extension of its remit is a reflection of that. It has saved the State millions of euro in fraudulent welfare claims but that does not justify Big Brother-style behaviour by the authorities in a digital world where people are slowly beginning to understand the critical significance and value of their personal data.