The Irish Times view on The Troubles at 50: A warning from history 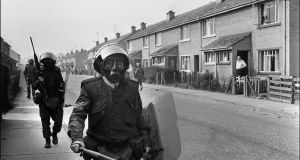 The events of August 1969 had a decisive impact on the course of Irish history. The Battle of the Bogside, the Catholic pogrom in Belfast, the flood of refugees to the Republic, the power struggle within the Irish Government and the deployment of the British Army on the streets of Northern Ireland were events that resonated down the decades.

The impact on the entire island of the violence which erupted so suddenly was captured in the series of articles published in the Irish Times over the past week to mark the 50th anniversary of the effective start of the Troubles.

Things were never the same after that dramatic week. The nakedly sectarian nature of the Northern state was exposed for the world to see and the British government, having ignored the discrimination and repression of the nationalist community for the previous 50 years, was forced to intervene and put soldiers on the streets of Derry to replace the RUC and the B Specials.

In due course that led to a series of political reforms but it took a very long time before a broadly acceptable agreement was arrived at on Good Friday 1998, and that settlement is currently under considerable strain.

On the negative side, the events of August 1969 triggered the split in the republican movement that led to the formation of the Provisional IRA and sparked its bloody campaign to achieve Irish unity by force. The then British home secretary James Callaghan remarked: “It was easy to send them in. It will be a damn sight more difficult to get them out.” How right he was.

The fallout from the events in the North had a destabilising impact on politics south of the Border. Jack Lynch’s Fianna Fáil government was deeply divided on how to respond, with some leading ministers advocating armed intervention on behalf of the besieged nationalist community. Lynch delivered a hard-hitting television address to the nation, calling for United Nations intervention and negotiations with the British on the constitutional position of the North. He was rebuffed, but his strong rhetoric defused the pressure to send the Irish Army across the Border. A month later he made the case for Irish unity to be pursued by peaceful means only and that has remained the policy of successive governments down to today.

Looking back at the events of 50 years ago some obvious improvements are clear. The Northern state is no longer run on discriminatory lines and violence on a large scale has ceased. However, the two communities are still deeply divided and cannot agree on the basis for the restoration of the power-sharing Assembly.

If there is one lesson from August 1969, it is that everybody needs to do more to make the Belfast Agreement work and ensure that there is no going back to the bad old days.

1 Trump threatens to ‘close down’ social media companies after Twitter fact-check
2 Michael McDowell: We will laugh at the puritanism of the two metre advice
3 O’Leary’s call for easing of flight restrictions criticised by health experts
4 Sil Fox tells of ‘months of hell’ as he is cleared of sex assault on woman in bar
5 Coronavirus: Denmark is reopening society quickly. How is it faring?
Real news has value SUBSCRIBE