While the trial may have brought some closure to the families of the victims, it had no such cathartic effect for the country at large 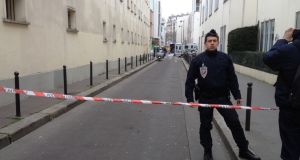 A policeman stands at a blocked road next to the ‘Charlie Hebdo’ headquarters where a shootout occurred in Paris, on January 7th 2015. A French court on this week sentenced 14 accomplices of the January 2015 terror attacks on the Charlie Hebdo satirical magazine and a Jewish supermarket. Photograph: Lisa Kreuzmann/ EPA

On the morning of January 7th 2015, brothers Saïd and Chérif Kouachi entered the Paris offices of the satirical newspaper Charlie Hebdo and opened fire, killing 11 people. They also murdered a police officer on the street outside. The terrorists claimed it was an act of vengeance for the paper’s publication of cartoons of the Prophet Muhammad years before. The next day, January 8th, Amedy Coulibaly shot dead a police officer in a Paris suburb. Then, as police scrambled to track down the killers, Coulibaly took hostages at a kosher supermarket in the city, killing a staff member and three customers. “You are Jews and French – the two things I hate the most,” Coulibaly told them.

The Kouachis and Coulibaly were killed in separate shoot-outs with police. But this week, after a trial that lasted three months, 14 people were found guilty of assisting the terrorist attacks. Their sentences ranged from four years to life imprisonment. Several of the defendants are thought to be dead.

While the trial may have brought some closure to the families of the victims, it had no such cathartic effect for the country at large. On a practical level, the proceedings left important questions unanswered. The defendants were primarily those who helped Coulibaly, whereas the network behind the Kouachi brothers remains unclear to this day. We don’t know how they got their weapons, nor who from Islamic State or al-Qaeda – both of which claimed responsibility for the attacks – may have ordered the crimes.

Even though the nature of the terrorist threat in France has shifted in recent years, with attacks more likely to come from lone attackers inspired by but unaffiliated with any larger network, the country continues to grapple with the same problems. In the last four months alone, the country has seen a stabbing outside the former offices of Charlie Hebdo, the beheading of a history teacherand a fatal attack on a church in Nice. The Charlie Hebdo trial covered the events of five years ago, but it described a trauma that France continues to live through.