The Irish Times view: Donald Trump runs out of road

Checks and balances on executive power have survived this presidency 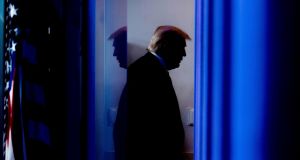 More worrying for the long-term future legitimacy of the US electoral process is Donald Trump’s success in undermining public faith in voting. File photograph: Getty

The firm rejection on Friday by the US Supreme Court of Texas’s attempt to overturn Joe Biden’s election and Monday’s confirmatory vote in the electoral college system should at last put paid to Donald Trump’s desperate attempts to hold on to power. Both developments reflect well on the underlying strength of the US’s imperfect democracy despite the pressure placed on it.

However, Trump is not giving up and is unlikely to do so. On Sunday he railed again on Twitter against the “MOST CORRUPT ELECTION IN U.S. HISTORY” and some Republicans are reported to be ready to try to overturn the vote in Congress on January 6th when the electoral college tallies are officially counted. They will require a majority in both houses, a prospect ruled out by the comfortable Democratic control of the House of Representatives.

A broader effort to persuade Republican-controlled state legislatures to swap out Democratic electors for a slate loyal to Trump failed, and five weeks of lawsuits, recounts and inquiries into unfounded claims of fraud, also went nowhere.

However, more worrying for the long-term future legitimacy of the US electoral process is Trump’s success in undermining public faith in voting. Some 77 per cent of Republicans now say mass fraud occurred, according to a new poll. And on Saturday, thousands of Trump’s supporters demonstrated in Washington and several state capitals. Clashes with counter-protesters produced several incidents of violence.

What marks the dividing line between dictatorship and a country lurching in that direction is ultimately the rule of law and its guarantor, the relative independence of the state’s institutions from its rulers. And, despite his best efforts to use the state as a personal plaything, Trump has never managed to match the success in that regard of Turkey’s Recep Erdogan, Russia’s Putin or Duterte of the Philippines.

Trump may have packed the Supreme Court with conservative judges – three of the nine were appointed by him – and he made no bones about his purpose in doing so. But the same court, which broke with many precedents to give George W Bush the 2001 presidency, baulked at a Trump/Texas action so devoid of credible legal argument that it found the plaintiffs had no standing to make their case.

Trump has complained bitterly every time his pliable Attorney General has demurred from using the justice department to harass opponents, or diplomats refused to browbeat foreign leaders into investigating a rival’s son, or congress denied him funding for the Wall. Fortunately, there are still checks and balances on executive power, democratic constraints that have survived a president who firmly believes, like Louis XIV, that “l’etat c’est moi”.