The Irish Times view on the Oireachtas climate report: enough with the hypocrisy 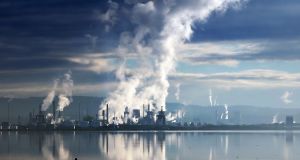 The report from the all-party Committee on Climate Action, produced after seven months of intense scrutiny of how climate breakdown threatens Ireland, sets out a new direction in responding to an existential threat to Planet Earth. Photograph: Jane Barlow/PA Wire

The report from the all-party Committee on Climate Action, produced after seven months of intense scrutiny of how climate breakdown threatens Ireland, sets out a new direction in responding to an existential threat to the planet. It amounts to a solid policy platform for the next 15 years.

However, it has to be considered in the context of what Friends of the Earth describes as “a climate emergency, because we now have to do in 10 years what we should have started 20 years ago”.

None of its 40 recommendations are over-costly or technologically risky. If anything, implementing them will make a decarbonised Ireland realisable with significant economic, health and environmental benefits.

Clarity on a rising pattern of carbon taxes to prompt a move away from fossil fuels is at last provided. The stakes are high, because if supports are not in place for those caught in fuel poverty, unable to retrofit their house or buy an electric vehicle, this will become a divisive issue and distract attention from what is needed at a much higher scale across the economy.

Few of the measures are radical or new. Most are overdue and, in some cases, such as the redirection of Irish agriculture, they are immensely challenging. But they suggest Irish politicians are beginning to face up to their responsibilities to deliver the kind of extensive and co-ordinated actions so many people desire.

Ambitious targets have been agreed – among them 70 per cent of electricity from renewable energy by 2030, and 1.5 million homes to be made carbon neutral. The critical driver, however, is a new governance structure to ensure national limits on carbon emissions are applied in five-yearly “carbon budgets”, while every Government department and State agency will be held accountable for their climate performance. Once in place, agreed measures cannot be abandoned with a change in government.

The failure to act in response to high levels of carbon emissions in transport and agriculture and disjointed policies on generating renewable energy, means Ireland’s emissions profile will worsen before it gets better. In response, every business, community, and individual should get on with with action to reduce their carbon footprint as quickly as possible.

The onus is now on the Government to incorporate the report into its plan, due to be published shortly, and the National Energy and Climate Plan to be finalised by the end of 2019. The broad consensus achieved should prompt a new coherence on policy and greater urgency. An end to hypocrisy on climate action, typified in supporting climate strikers while voting against the Climate Emergency Measures Bill to end future fossil fuel extraction in Ireland, is essential. There is much to do, but the committee has provided fair winds.

1 Three relatives dead after apparent murder-suicide in Kanturk, Co Cork
2 Don McLean: ‘My ex-wife is the worst person I ever knew’
3 Gardaí not seeking anyone else in relation to Cork shooting deaths
4 Gardaí say 52 people who went missing in 2020 not yet found
5 Cork suspected murder-suicide may have been over disputed will
Real news has value SUBSCRIBE