The Irish Times view on the next European Parliament: a new centre takes shape 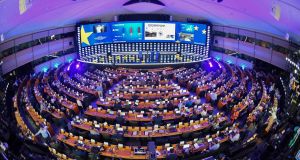 In European politics, this is an age of fragmentation. A trend that has been underway in EU member states for almost a decade – the decline, and in some cases the collapse, of the major parties of the centre-left and centre-right – is now re-shaping the European Parliament. As expected, the combined vote of the two groupings that have controlled the assembly for four decades – the European People’s Party and the Socialists and Democrats – has fallen below 50 per cent. This election was particularly bad for the centre-left, which fell from 191 seats to 150.

Yet, for pro-Europeans, there is nonetheless plenty of encouragement to take from the Europe-wide results. That’s largely because, contrary to the fears of many in recent weeks, the far-right surge turned out to be weaker than expected and the decline of the two big blocs occurred in parallel with a significant rise in support for Greens and liberals, shoring up the parliament’s progressive, outward-looking centre.

It would be wrong to downplay the advance of the far-right, which performed strongly in many countries. It was a good election for Viktor Orban in Hungary, Poland’s Law and Justice party, Matteo Salvini’s Lega in Italy and Marine Le Pen’s Rassemblement National, which edged President Emmanuel Macron’s centrist outfit into second place. But this was no tsunami. The Danish People’s party saw its vote collapse. Alternative für Deutschland came fourth. In the Netherlands, the anti-Islam Freedom Party lost all four of its seats. The vote for Le Pen’s party is actually down on its 2014 showing. Moreover, the far-right parties remain divided on so many issues that even with a combined 25 per cent of the vote, they could struggle to form a coherent bloc.

Far more likely to extend their influence are the liberals and, in particular, the Greens. The ecologists nearly doubled their vote to come second in Germany. They did well in France and the Netherlands, doubled their vote share in Finland and Denmark and are set to win seats in Ireland for the first time this century. Combined with a good election for the liberals, that suggests a new, more diverse centre is taking shape – one that could affect the parliament’s positions not only on climate change but on economic policy and all the other quality-of-life issues, such as planning and urban living, that helped the Greens win big.

European Parliament elections seldom feel like truly European events. This one did – a reflection, perhaps, of the parliament’s rising power but also the primacy of transnational issues such as global warming in many voters’ minds. For the first time in four decades, turnout was up, to 51 per cent from 43 per cent in 2014. And whereas many feared that the most motivated voters would be the anti-Europeans, the results show that, across the continent, large numbers of people can be mobilised in defence of the EU’s ideals.