The Irish Times view on the European elections: high stakes – and a clear choice 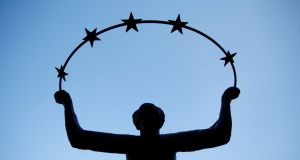 The claim that the European Parliament is a talking shop is not only lazy - it is plain wrong. Photograph: Vincent Kessler/Reuters

In the coming days, in the second largest democratic exercise in the world (after India’s election), voters across the European Union will select 751 members of the European Parliament for a five-year term. For the estimated 374 million people who are old enough to vote, including more than three million who are eligible to vote in Ireland on Friday, the stakes are higher than at any point since the first elections to the assembly were held in 1979.

Opinion polls suggest that the duopoly that has controlled the parliament for decades is about to lose its majority, with the combined vote of the conservative European People’s Party and the centre-left Socialists and Democrats falling below 50 per cent. Pro-EU parties are likely to retain a majority if the Liberals and Greens perform as well as expected, but the traditional parties have been rattled by polls pointing to a surge in support for the far-right across the continent.

The populist parties – currently spread across three political groupings in the parliament – may be divided on many issues, from economic policy to relations with Russia, but they agree on enough to pose a serious threat to the broad liberal-democratic consensus that underpins the EU. That makes for a clear choice. This election is a contest between those who uphold the idea of a liberal, open, social and progressive Europe and those who reject those values in favour of what Hungarian prime minister Viktor Orban calls “illiberal democracy”.

The candidate lists in all three Irish constituencies are replete with people who, to judge from their campaign performances, either do not know or do not care what an MEP can and cannot do. The best candidates know that the Strasbourg parliament can affect Irish housing or schools or the health service in relatively limited ways and do not pretend otherwise.

But they also understand the potential of an institution that has been steadily accreting new powers for years and will have a major say on issues such as the climate crisis, migration, the EU budget, farming, fisheries, energy, tax policy and data protection. The claim that the European Parliament is a talking shop is not only lazy – it is plain wrong.

That’s why the calibre of MEP Ireland sends to the continent is important – now, perhaps, more than ever. The EU is entering a critical moment in which it must show leadership on the most fundamental crises the world faces – none greater, of course, than the catastrophic heating of the planet – while fending off an existential threat to the most basic principles of the entire European project. On Friday, we are voting not merely to send politicians to Europe. We are voting in defence of the most basic liberal values, and in favour of a progressive union prepared to lead in a world facing the greatest peril.