The Irish Times view: the tragic inadequacy of Theresa May 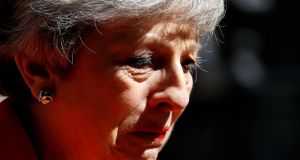 British prime minister Theresa May as she announces her resignation outside 10 Downing street in London on Friday. Photograph: Tolga Akmen/AFP/Getty Images

When she took office in the chaotic aftermath of the Brexit referendum in 2016, Theresa May inherited a fractured party, a divided society and a political crisis worse than any Britain had faced in the postwar era. In that febrile atmosphere, she had the unenviable task of having to implement a decision that was – and she must have known it – guaranteed to make the United Kingdom poorer and less influential in the world. Any prime minister would have struggled. Yet, notwithstanding the personal sympathy many will feel for her in the wake of her tearful resignation on Friday, the inescapable conclusion is that Theresa May was a singularly inadequate leader whose errors and misjudgments have made a bad situation immeasurably – perhaps irrevocably – worse.

It was May who defined Brexit in the hardest possible terms – a decision she took not because that option had appeared on the ballot paper but because, from day one, she put the small-minded obsessions of right-wing extremists in her own party above the British national interest. It was May who activated the article 50 withdrawal process before she knew what she wanted from the negotiations with the EU, let alone how she would get it. And it was May who drew irreconcilable red lines that locked London into a deal that her party and her parliament could not support.

It was May who failed to grasp the power imbalance she faced in her negotiations with the EU27, and who spurned whatever goodwill and leverage she had by needlessly insulting her European partners and dispatching to Brussels a series of ineffectual Brexit secretaries who were hopelessly out of their depth. In her resignation statement, May spoke of the value of compromise. Yet it was she who cleaved to the slogan that “no deal is better than a bad deal”, and who persisted for far too long in peddling the fiction that London could somehow dictate terms, leaving her party and her support base completely unprepared for the compromises that were always inevitable.

It was May who prioritised the fringe concerns of the Democratic Unionist Party above the wishes of the majority in Northern Ireland because doing so kept her party in power. It was May who appointed Boris Johnson to be Britain’s chief diplomat, making her country the butt of jokes around the world and contributing to a situation in which that man, laughably, is now regarded as a serious candidate to be the next prime minister.

Finally, tragically, it was May who resisted reaching across the aisle to seek a majority for a sensible way forward until it was too late. Eventually, she realised Britain was heading for the rocks and tried to change course. When she did, not surprisingly, she stood isolated and alone – betrayed by her allies, rejected by her opponents, the extremists she had done so much to empower seeing their moment to take her down.

1 Miriam Lord: Minister for Agriculture tries to get himself out of the manure
2 Coronavirus: One more death and 24 new cases reported in the Republic
3 Storey funeral highlights fundamental problems with Sinn Féin
4 239 experts with one big claim: Coronavirus is airborne
5 Taoiseach rules out united Ireland referendum as ‘divisive’
Real news has value SUBSCRIBE