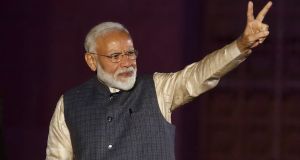 Fresh from his impressive victory in the Indian elections last week, outgoing prime minister Narendra Modi promised voters in a Twitter message: “Together we will build a strong and inclusive India”. His choice of medium fully reflects a campaign in which he completely dominated the online and social sphere, in addition to his formidable performative and organisational skills.

It is the first time since 1971 that a candidate has secured such a convincing second mandate. On that occasion is was Indira Gandhi. What marks this election off is the decisive displacement of the secular Congress party led by the Gandhi-Nehru dynasty as the dominant force in Indian politics by the Hindu majoritarian Bharatiya Janata Party (BJP) led by Modi.

The major challenge he faces in his second term is how he will live up to his promise of an inclusive India. He won the election in good part by boasting about how ready he was to assert India’s military strength in response to the terrorist attack which killed 40 of its troops in Kashmir last February.

Subliminally his tough response to Pakistan sent a message to voters that India’s 200 million-strong Muslim minority needs to accept a new Hindu assertiveness and identity politics. That is Modi’s and the BJP’s background. Secular and minority faith Indians fear it could frame his second term, based on restrictive legal and media practices already apparent in his first one.

An alternative and much preferable course which would better help secure inclusivity would be a renewal of the promises to reform and modernise India on which he was first elected in 2014.

His economic policies to open markets and change regulations have been patchy, notably on youth employment and agriculture, despite buoyant economic growth. His positive record on combatting corruption and his capacity to harness technological change can be reinforced to much greater advantage for most Indians. He has an opportunity to position India more prominently in the changing geopolitics of south Asia.

1 Former Kilkenny hurler dies after bike struck by tractor
2 Why you still can’t have a European holiday this summer. Or can you?
3 Nine more deaths from Covid-19 recorded in Ireland along with 24 new cases
4 Green Party’s Catherine Martin confirms she will stand against Eamon Ryan
5 One of most powerful images of War of Independence
Real news has value SUBSCRIBE