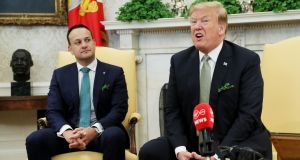 The Taoiseach will be obliged to accord a courteous welcome to Trump even if he and his Ministers will hardly relish the prospect of being associated with such an unpopular figure with an election here expected later in the year. Photograph: Brian Lawless/PA Wire

President Donald Trump’s visit to Ireland next month is probably the last thing the Government needs, but Taoiseach Leo Varadkar did issue the invitation and must deal with his guest as best he can. The ties that bind Ireland and the United States are so important for historic, cultural and economic reasons that Varadkar had little option but to invite the US president.

The Taoiseach will be obliged to accord a courteous welcome to Trump even if he and his Ministers will hardly relish the prospect of being associated with such an unpopular figure with an election here expected later in the year.

The president’s record at home and abroad will ensure that his visit to Co Clare will generate protests. This was acknowledged by Varadkar, who remarked in his initial response to the visit that in a democracy, protest “is allowed and is welcome”. This statement of fact was misconstrued in some quarters as encouragement to protest but, one way or another, big protests can be expected. And that is good.

The challenge facing the Taoiseach will be to find a way to have a reasonably amicable exchange with the president while staking out a firm position on issues that directly concern Ireland and the EU. A priority will be to try and explain one more time why membership of the EU is a vital national interest for this State.

President Trump has never made any secret of his dislike for the EU and his sympathy for Britain’s Brexiteers, particularly Nigel Farage, whom he regards as a kindrid spirit. Still, he has not followed up on that sentiment with an offer of a favourable trade deal for the UK and does not appear to be in any hurry to do so.

On the international front, when it comes to issues like free trade, climate change and the Iran nuclear deal, Varadkar will have to let the president know that this State takes a very different view to his and regards international cooperation as vitally important. Although the Taoiseach may not wish to stage a direct confrontation with the President, he will have to be both clear and firm.

1 Transgender Cork farmer (65) surprised at positive response to telling her story
2 Bobby Storey: The IRA's planner and enforcer who stayed in the shadows
3 Storey funeral a reminder that IRA army council runs Sinn Féin
4 Q&A: How close are we to having a Covid-19 vaccine?
5 Weather warning issued for parts of the country for this weekend
Real news has value SUBSCRIBE