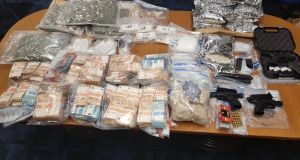 Photo issued by the Garda of almost a million euros worth of drugs, guns and cash seized by the force. Photograph: Garda/PA

One of the good news stories of the Covid-19 pandemic has been plummeting crime rates. Immediately lock-down measures were implemented in the spring, most crime plummeted. From offences against the person to property crimes, the number of offences being reported decreased significantly, even if those trends have begun to reverse more recently.

There have been exceptions, of course, and the trade in illicit drugs has bucked the national trend. The number of cases of possession of drugs for sale or supply, for example, increased by 25 per cent in the second quarter of the year. Even driving under the influence of drugs increased significantly, by 108 per cent, at a time when drink driving declined by 15 per cent.

There have also been a series of multimillion euro drug and cash seizures in recent months by the Garda and Revenue. The size of those drugs hauls reflects a drug user market in rude health. This is despite many pubs and all nightclubs being closed and the reduction in income for so many during the pandemic. In recent years the Kinahan cartel has been under immense pressure as the Garda tackled its feud with the Hutch criminal group and hundreds of arrests have been made. However, gardaí and other security sources have saidrecently that other gangs have profited from the pressure on the Kinahan cartel by taking a bigger piece of the drugs wholesale market.

The names of the men who rule the underworld will change about every decade. But the trade itself never changes, apart from getting bigger. While the leadership of the Kinahan cartel remains at large abroad, the cartel’s presence in the Republic has been degraded by determined and well-funded Garda investigations. The energy of the Garda’s campaign against the Kinahan cartel’s Irish operation must now also be applied to the other major crime groups. Furthermore, funding for projects that would divert at-risk young people from crime cannot become the victim of the new economic realities in the Republic.