The Irish Times view on the Covid-19 crisis: an alarming regression

Beyond the threat facing our hospitals, the key immediate challenge for Government is to decide whether schools will reopen next week 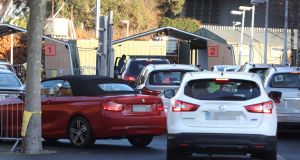 Cars line up at the Covid-19 testing facility centre at the Aviva Stadium in Dublin as demand for tests increases. Photograph: Leah Farrell/RollingNews.ie

The final weeks of 2020 were a time of guarded optimism, the prospect of imminent distribution of Covid-19 vaccines and a relatively stable infection rate together generating a sense of hope that the worst of the pandemic had passed. Just a few days into 2021, however, we can see that things will get a lot worse before they get better.

Across all indicators, and for every part of the island, this is an extremely dangerous moment. An alarming spike in incidence of the disease has pushed the number of daily cases to a record level of more than 6,000 in the Republic alone. Even if that partly reflects a lag in testing and case-confirmation over the Christmas period, it nonetheless points to a real and powerful surge. HSE chief executive Paul Reid says the virus is out of control in the community and predicts daily cases could reach 7,000 by the end of the month.

Unlike in October-November, when higher prevalence of the disease did not result in a steep rise in hospitalisations, the numbers in hospital are soaring each day.

This third wave has caught both Government and its advisory body, the National Public Health Emergency Team (Nphet), off guard. Nphet sounded the alarm over a rising infection rate before Christmas, but if we assume, as the team does, that the more contagious Covid-19 variant accounts for only a relatively small proportion of total cases, then its models appear to have significantly under-estimated people’s willingness to mix over Christmas. The current epidemiological situation is much worse than Nphet’s worst-case modelling in December.

But on the basis that any Government’s approach to the pandemic ought to be to hope for the best while preparing for the worst, we now once again see worrying gaps emerging. Testing of close contacts has had to be stopped due to high demand. And the State’s IT system appears incapable of logging much more than 2,000 cases a day, which has produced a backlog of positive but uncertified cases. At the same time, we are not in a position to assess the vaccination programme because information on its progress has been sporadic.

Beyond the threat facing our hospitals, the key immediate challenge for Government is to decide whether schools will reopen next week. Keeping them closed would be a huge setback, given the evidence that disadvantaged children and those with disabilities suffered severe regression during the first shutdown last year. At the same time, teachers are understandably anxious and eager for reassurance. If schools are to stay shut, the decision should be made quickly – and only with a timetable for reopening. Children’s education must remain a priority. And if that means keeping other areas of economic and social life on hold for longer, so be it.