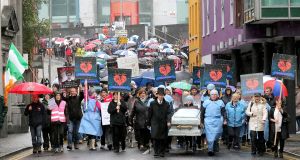 John Doherty’s pains started last December 14th. Unfortunately for him, it was a Saturday morning. In Waterford, it matters which day of the week you have your heart attack.

“I had pockets of air stuck in my lungs. It was just very, very sore pains,” recalls the 54-year-old, who has chronic obstructive pulmonary disease (COPD) but no prior history of heart disease.

He went to the local GP out-of-hours service, Caredoc first, and was sent to the emergency department at University Hospital Waterford (UHW). “They told me: ‘You probably need an angiogram to see what’s going on.’” But it was Saturday and “the cath lab was closed. There was no cardiologist there.”

After a normal electrocardiogram (ECG) and some other tests which seemed to rule out a heart issue, he was sent home with steroids for his COPD.

By Monday, December 16th, the pains in his chest were “wicked”. “I had an appointment with my own doctor.” He suggested it might be angina and sent Doherty back to UHW.

“Within minutes, a cardiologist came out to me. He said, what are the pains like? I had three pains: one of the top of my chest, one in the middle, and a massive pain right in the centre. They gave me a spray underneath the tongue. If this works, we know we’re dealing with the heart.” After that, he says “all hell broke loose”.

Because the cath lab was busy with other emergency cases, his angiogram couldn’t go ahead immediately. He was stabilised, and ultimately, he didn’t get it until Christmas Eve, when he had his second major cardiac event. “They put in a stent there and then.”

“If I was anywhere else in the country, it would have been dealt with straight away,” Doherty says. “I went out on the Saturday. The staff were fantastic, but the cath lab was closed, and there was nothing they could do.”

Doherty has been part of the campaign for a second cath lab for Waterford since 2012. “You don’t know when you’ll need it. I found out the hard way. That’s when reality hits you in the face. You’re on your own down here after 5pm.”