Covid-19: Schools in North move to remote learning for an ‘extended period’ 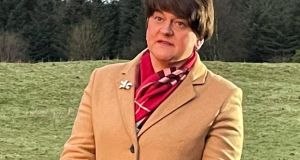 Schools in the North are to move to remote learning for an “extended period”, the Executive Office announced late last night following an emergency meeting on Monday night.

Ministers also agreed that advice on staying at home will be made legally enforceable.

Ealier Northern Ireland’s First Minister has warned the North is in a “very dire situation” and action must be taken “very quickly” to halt the spread of coronavirus.

She also said discussions would take place with the police “to see what more we can do in relation to enforcement.”

At an emergency meeting of the Executive on Monday night as ministers discussed the introduction of further restrictions to limit the spread of coronavirus.

Announcing a strict lockdown and the closure of schools in England in a televised address on Monday night, the UK prime minister, Boris Johnson, said “similar steps” were being taken in Northern Ireland, Scotland and Wales.

Speaking to reporters before the Executive meeting began, Ms Foster said she did not want to prejudge the discussion but there were “very difficult decisions to take.

“I would like to keep schools open for as long as possible but if it is the case that we do need to close schools as we did in March of last year, I will deeply regret that, but we will of course take whatever action is needed based on the medical evidence in front of us,” she said.

A further 1,801 people in Northern Ireland tested positive for the virus in the last 24 hours, the North’s Department of Health (DoH) said on Monday, with a total of 12,507 new cases identified in the last seven days.

A further 12 people with coronavirus died, bringing the total number of fatalities reported by the Department to 1,366.

The meeting of the Northern Executive, which was due to take place on Tuesday, was brought forward because of concerns over the increasing number of cases.

The Deputy First Minister, Michelle O’Neill, said the message to stay at home should be put back into law “because that is the only way you can enforce it. We are sitting with an alarming rise in cases,” she said.

“There are not many more restrictions that remain open to us, so it’s a combination of restrictions but also, most importantly of all, following the advice and abiding by those restrictions,” he said.

Northern Ireland entered a strict lockdown on St Stephen’s Day which is due to remain in place until at least the end of January. Non-essential retail is closed, and school teaching has been moved online for most pupils for the next week, but there have been increasing calls for schools to be closed for longer, and the transfer test exam, which is due to be sat by some primary school pupils on Saturday, to be cancelled.

Dr McBride said the number of cases was “very deeply troubling”, demonstrating that the health service was going to come under “extreme pressures” in the coming weeks.

The SDLP has tabled a motion calling for the recall of the North’s Assembly to discuss the increasing number of Covid-19 cases and urging the First and Deputy First Ministers to take “immediate action” and introduce new measures to limit the spread of the virus.

Meanwhile, the first doses of the Oxford/AstraZeneca vaccine were administered in Northern Ireland on Monday.

The first person in the over-80 category to receive the vaccine was 94-year-old Eileen Lynch, who gave the thumbs up as she was vaccinated by Dr Michael McKenna at her local GP surgery on the Falls Road in west Belfast.

Ms Lynch said she was “delighted and privileged” to receive the vaccine and thanked the nurses, doctors and staff who she said had all been “brilliant”.

“I feel like I can really look forward to the year ahead now that I have been vaccinated,” she said.

A total of 50,000 doses of the vaccine have been made available in the North, with more due to arrive this month.

Priority is being given to the over-80s, and it is estimated that all of this age group will have received the vaccine by the end of the month.

About 40,000 people have already received the Pfizer/BioNtech vaccine in Northern Ireland.