Measure under consideration would allow tax-free turnover of €2.5 million a year 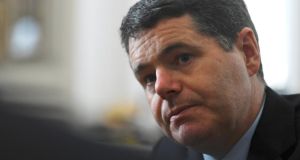 The Government is considering cutting betting duty by allowing bookies a tax-free turnover of €2.5 million a year in a move aimed at aiding smaller players.

The Minister for Finance, Paschal Donohoe, doubled betting tax this year to 2 per cent of turnover, following lobbying from the horse racing and breeding industries, which say their businesses provide a mainstay for online and high street bookies.

However, the Government is now considering levying the tax only on turnover above €2.5 million a year after industry body, the Irish Bookmakers’ Association, claimed the doubling of the tax rate was putting smaller, independent operators out of business.

The group’s report states that introducing the €2.5 million threshold would would cut the betting tax collected by the State by €3.4 million in 2020.

Following representations from the Irish Bookmakers’ Association the Department of Finance considered another proposal that would have involved online operators paying twice the tax paid by bookie shops.

Talks with Brussels indicated that this proposal could have breached European Union state-aid rules. These ban governments from supporting businesses in any way that is likely to distort normal commercial competition.

Legislation passed in 2001 linked betting tax with State support for horse and dog racing. However, the tax strategy group’s report states that one of the reasons for taxing bets is to account for “the social costs of problem gambling”.

Its report notes that research categorised eight out of every 1,000 Irish people as problem gamblers.