The Irish Times view on the Amazon fires: Throwing fuel on the flames 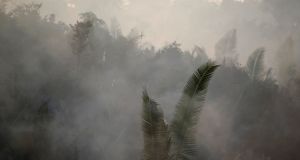 Smoke billows during a fire in an area of the Amazon rainforest near Humaita, Amazonas State, Brazil, last week. Photograph: Ueslei Marcelino/Reuters

This year’s burning season in South America has provoked worldwide alarm that Brazil’s far-right president Jair Bolsonaro is overseeing the destruction of the planet’s greatest rainforest.

Images of the Amazon in flames, the smoke visible from space, shock all the more in an age of increasing anxiety about accelerating climate change caused by human activity.

Despite the impression left by much of the coverage, this year’s fires are not the worst on record. Previous cycles of destruction in the Amazon were more devastating.

But this provides no comfort for two interlinked reasons. Firstly Brazil’s agency which monitors the Amazon has detected a clear upward trend in deforestation, reversing previous hard-won successes in tackling the problem.

And this comes after decades of accumulated losses. The risk now is a new cycle of deforestation will lead to a tipping-point in which more clearing provokes a collapse of the rainforest’s delicate ecosystem.

As well as causing the loss of the planet’s most biodiverse habitat this would also catastrophically compromise efforts to limit global warming.

Bolsonaro has responded to the current alarm with his usual mix of paranoid bluster. This is only to be expected from someone who appointed a climate-change denier as his foreign minister.

He has even pointed the finger of blame for the fires at non-governmental agencies, essentially accusing people devoted to preserving the rainforest of setting fire to it.

In fact his self-declared war on what he sees as Brazil’s “industry” of environmental fines has likely led many to risk illegal clearing and burning of forest in the expectation his administration will look the other way.

The question now is how does the international community raise the issue with a government which views any foreign concern for the Amazon as outside interference in Brazil’s sovereign territory.

Members of Brazil’s government have already dismissed European criticism of its environmental policy as a pretext for efforts to stymie Brazil’s economic growth.

Taoiseach Leo Varadkar’s threat to veto the recently agreed trade deal between the European Union and the South American trade bloc Mercosur if Brazil does not protect its rainforest will be viewed in this light, especially as Irish farmers are already identified in Brazil as vocal opponents of the accord.

But Brazil’s powerful agri-business sector is its pressure point. Even before the current burning season its leaders were worried Bolsonaro’s anti-environmental actions and rhetoric risked damaging its international reputation.

The European Union should make it clear they are correct to be concerned in the hope they redouble their efforts to make Bolsonaro see sense.