The Irish Times view on Russia’s nuclear explosion: nothing to see here 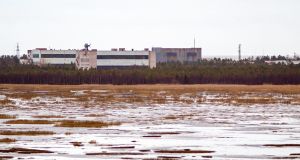 A picture taken in 2011 shows buildings at a military base in the small town of Nenonska in the Arkhangelsk region. Photograph: AFP/Getty Images

Two weeks after a nuclear accident at a Russian military site on the White Sea, Moscow has still not explained what happened, why it happened or what damage it caused.

Instead, a combination of rumours, satellite data, sensor readings and western analysis – as well as a shifting official version of events – has been required to assemble an account of what took place offshore at the Nenonska test site in northern Russia on August 8th.

What is known is that at least seven people, including scientists, were killed after a nuclear reactor exploded at the site. The accident caused a spike in radiation in the city of Severodvinsk, 32 km away. The Russian military initially said that a fire had broken out when a liquid-fuelled rocket engine exploded at a testing site, but that radiation remained at normal background levels.

That was later contradicted, however, with monitoring data and statements from Rosatom, the Russian atomic energy agency, confirming the explosion occurred while testing an “isotope power source in a liquid propulsion system”.

Western analysts have speculated that Russia could have been testing an experimental nuclear-powered cruise missile first mentioned by President Vladimir Putin last year. The missile would in theory have unlimited range and be capable of evading US missile defence systems because of its unpredictable flight paths.

Doubts remain about the viability of the missile. But nuclear arms races are as much about creating the impression of strength as they are about the state of an arsenal in itself. The mysterious explosion at Nenonska is therefore a blow to Putin, who has linked the restoration of Russian influence to the strength of its military capabilities.

Moreover, his government’s refusal to level with its citizens about something as significant as a nuclear explosion will further erode public trust at a time when street protests are revealing a degree of restiveness with his long rule.

1 Gardaí found naked man on a cross being whipped in Dublin club, court told
2 Two in custody after Ryanair flight to Dublin forced to divert
3 Coronavirus: Number of cases rise by 32 but no new deaths reported in the State
4 David McWilliams: ‘Ireland is three decisions away from being a perfect country’
5 A US food writer moved to Ireland. Here’s what he found
Real news has value SUBSCRIBE