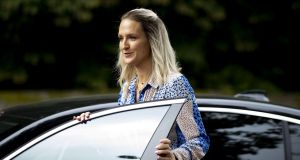 Minister for Justice Helen McEntee said the hoods should only be used in “extreme circumstances”. Photograph: Tom Honan for The Irish Times.

The Policing Authority has observed a significant improvement in the quality of Irish policing during the Covid-19 pandemic and even a new “tone” to how it is done. Most encouragingly, it has pointed to a “paradigm shift” in the way the Garda has dealt with the spike in domestic violence. However, the authority has voiced repeated opposition to so-called spit hoods given to gardaí. The hoods are mesh coverings that can be placed over a suspect’s head. They were distributed within the force to prevent suspects spitting or coughing at gardaí amid concerns such attacks may result in Covid-19 infection. The authority says the hoods are “draconian”, that a range of human rights concerns arise and that their use offered no proven protection from Covid-19.

In its latest report , it says that under no circumstances should a review of the hoods currently underway within the Garda be used as a means of retaining them into the future. Minister for Justice Helen McEntee said the hoods should only be used in “extreme circumstances”. The hoods were used on suspects 104 times from mid-April to the end of August. This included on a small number of children and people with “perceived” mental health issues. Some 192 spitting and coughing attacks on gardaí have been recorded during the pandemic. When the Association of Garda Sergeants and Inspectors surveyed its members, 86 per cent were in favour of retaining the hoods beyond the pandemic.

Garda members do an often difficult job, with the risk of attack while on duty ever-present. Coughing and spitting attacks endured by some gardaí during the pandemic are obnoxious. Those responsible can – and should – be prosecuted for assault. However, the hoods were introduced as a pandemic-specific item and should be withdrawn before any effort is made to re-introduce them for the longer term. Such a controversial item, for a mostly unarmed police force, should not become normalised by stealth. Let the review of the hoods conclude and their use expire, as was always intended.