The Irish Times view on a shared island: a blueprint for better relations

A shared Ireland is a prerequisite for a united Ireland, but such an outcome is not the only possible expression of sharing 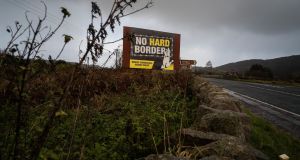 If a hard or no-deal Brexit pushes Scotland towards independence unionists, nationalists and others on this island need to prepare for a potentially closer future together, sooner than they may expect or want. Photograph: Paulo Nunes dos Santos/ The New York Times

During a period of rapid change and deep uncertainty in Ireland’s relations with neighbours and international partners it makes real sense to encourage a shared space for better relations on the island between nationalists, unionists and those who accept neither designation. That is why the Government says it has set up a Shared Island unit in the Taoiseach’s office. The ambitious and multi-dimensional nature of the tasks involved have been explored in a series of articles in this newspaper. Respectful dialogue, comprehensive research and honest preparedness for unexpected change will be required to deliver on their potential.

Asked in an interview whether the Shared Island unit is a means to the end of a united Ireland or an end in itself, Taoiseach Micheál Martin said it “will help deliver the new norm, whatever that new norm is”. He thinks the “hard yards” of deepening dialogue are more difficult but more effective than rhetoric about setting timescales for referendums on unity.

He criticises Sinn Féin for that, urging instead that joint activities on infrastructure, economic growth and international trade be combined with greater mutual understanding of health, education and other everyday concerns, alongside determined efforts to bed down better political relations between North and South in Ireland and between Ireland and Britain under the Belfast Agreement.

A shared Ireland is a prerequisite for a united Ireland, but such an outcome is not the only possible expression of sharing. There is ample scope to fill out these aspects of the 1998 agreement in coming years, all the more so because Brexit brings so many uncertainties to those tasks. Unionists interviewed for this series forcefully make the case that they are not deluded Irishmen needing to be converted but have their own British identities needing to be respected. That requires a shared islands approach, adds Steve Aiken of the the Ulster Unionist Party. Such a pluralist ethos is fully in keeping with the agreement and is in fact protected by it whatever constitutional futures come to pass.

But unionists too face their own deep uncertainties confronted with Brexit and its destructive impact on the United Kingdom. That is exemplified in hostile Scottish and Welsh reactions to the latest legislation on the UK’s internal market which breaches the EU Withdrawal Agreement. If a hard or no-deal Brexit pushes Scotland towards independence unionists, nationalists and others on this island need to prepare for a potentially closer future together, sooner than they may expect or want.

All this makes the Shared Island initiative a valuable opportunity to talk and think through these quickening events in a spirit of cooperation, mutual respect and openness to change.