The Irish Times view on Russian interference: a warning from London 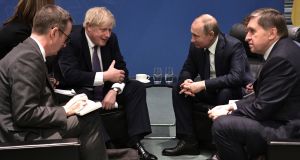 Boris Johnson’s 10-month delay in releasing the Russia report from Westminster’s intelligence and security committee led many to expect a smoking gun pointing to interference in the 2016 EU referendum. But if the report found no evidence of such interference it was because neither the Conservative government nor Britain’s intelligence and security services bothered to look for it.

This failure to investigate came despite evidence that Moscow tried to influence the 2014 Scottish independence referendum and hacked Democratic National Committee emails ahead of the 2016 US presidential election. The committee found that the security services were shy of taking on such a politically delicate investigation and nobody in government encouraged them to do so.

The report paints a broader picture of official neglect of the threat from Russia and it identifies Britain as one of Vladimir Putin’s key targets in the West. Preoccupied by counterterrorism and inhibited by an inadequate Official Secrets Act that was last updated in 1989, the agencies “took their eye off the ball” as Russia moved from being a potential partner to a hostile actor.

While the Kremlin ordered the murder of Putin’s critics on British soil, conducted an illegal annexation of Crimea and acted as an increasingly malign force in the Middle East, London remained a magnet for Russian oligarchs. The report takes aim at an industry of enablers, including lawyers, accountants and estate agents, who helped to turn the City of London into a laundromat for dirty Russian money. A growing number of European countries have found evidence of Russian attempts to interfere in their politics.

Technology and social media giants, many of which have their European headquarters in Dublin, must take more responsibility for preventing hostile state actors from using their platforms to attack democracy. The Russia report has tough words for the British authorities about their failure to engage seriously with the threat of interference in the democratic process. It is a warning that should be heeded in Dublin too.