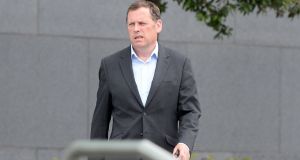 Former Minister for Agriculture Barry Cowen arrives for the Dáil sitting at the Convention Centre in Dublin on Wednesday. Photograph: Dara Mac Donaill

Taoiseach Micheál Martin had no choice but to assert authority and dismiss Barry Cowen from the Government. Once the Minister for Agriculture had refused to go into the Dáil to answer further questions about his encounter with gardaí over his drink-driving offence four years ago, his position became untenable. The Taoiseach made his own position more difficult on Tuesday by apparently defending his embattled Minister, having seen the Garda Pulse file. That is what made the decision to sack Cowen later in the day such a bombshell.

Ultimately it was simply unacceptable for Cowen to refuse to provide additional information about the matter in the Dáil. The controversy would have dragged on indefinitely if the former Minister had remained in office without providing answers to legitimate questions. The Government has enough serious issues to contend with, the Covid-19 pandemic chief among them, without being distracted for the foreseeable future by a controversy over an individual cabinet member. Hopefully the departure of Cowen and his replacement by party deputy leader Dara Calleary will put at least one distraction to rest and allow the Government to focus on vitally important challenges on the health and economic fronts.

Martin has had an unsteady start to his period in the Taoiseach’s office and, to make matters worse, most of the wounds have been self-inflicted. His decision not to appoint Calleary to the Cabinet in the first place was inexplicable while his handling of the Cowen episode has been erratic.

It is still unclear what exactly happened when the former Minister was stopped by gardaí four years ago. Reasonable questions arise. At the same time, it is unsurprising that Cowen is aggrieved at the leaking of details about his case. There are further questions in this regard. For the Government, the only silver lining is that the episode does not appear to have damaged the cohesion of the three-party coalition. Fianna Fáil was allowed to sort out its own problems without pressure from Fine Gael and the Greens. It is now time for all of them to get down to serious work.