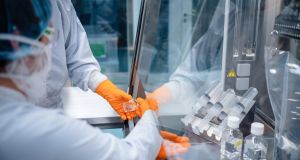 In announcing that Britain’s medicines regulator had given early approval to the Pfizer/BioNTech vaccine - thus becoming the first state to sanction its use - and that the first jabs would be given next week, British government ministers could not resist making cheap political points. Photograph: BioNTech SE 2020/PA Wire

For months public health authorities have worked to temper expectations about the chances of a vaccine bringing a swift end to the Covid-19 pandemic. Their caution was well-advised; vaccine development is usually a slow and bumpy process, and there was a real risk – there still is – that high hopes of mass immunisation could turn into complacency, enabling the disease to spread more rapidly in societies that had let their guard down. And yet, now that several vaccines are on the way, it’s impossible not to marvel at the scientific achievement this represents and its potential to bring this global crisis under control.

That day remains some way off, of course, and there is complex work to be done to get us there. The key question is whether, now that the world’s scientists have pulled off this immense feat, governments themselves will be up to the challenge they now face, which is to ensure that those who need a vaccine the most – wherever they might happen to live, irrespective of income – will receive it in a timely, efficient and safe manner.

Events in London this week do not augur particularly well. In announcing that Britain’s medicines regulator had given early approval to the Pfizer/BioNTech vaccine and that the first jabs would be given next week, British government ministers could not resist making cheap political points. The country’s health minister, Matt Hancock, erroneously claimed Brexit had enabled it to grant early approval (all EU states could do likewise but have chosen not to). Another minister – a minister for education, of all things – said it was due to Britain being “a better country” than all the others. Public health specialists in Europe and the US have implied that London acted too quickly in giving the vaccine the green light and worry that doing so will harm public confidence in vaccines. Just like other governments that have botched the Covid-19 response, such as the US and Russia, London is playing politics with the vaccine. Even though Ireland will benefit from the decision – the first 25,000 doses arrived in Northern Ireland on Friday – that is wrong.

For the Government here, getting the vaccine programme right is its biggest challenge. It is a vastly complex undertaking like nothing the State has ever done. The authorities must decide the order in which people receive the jabs. They must train vaccinators, produce a communications plan, ensure cold storage capacity and transport is available, build a national database to keep track of the programme and make sure the doses it has ordered can actually make it to the island even in the event of post-Brexit delays. And, with the first deliveries due in early January, it must do all of this in real time. The stakes could scarcely be higher. Get this wrong and the cost in lives and livelihoods will be huge. Get it right, and this nightmare may soon be over.