The Irish Times view on refugee housing: no place to live 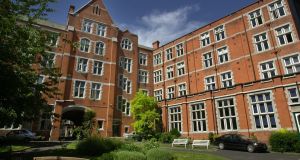 Hatch Hall asylum seeker accommodatoin centre in Dublin. In documents released to this newspaper under the Freedom of Information Act, Department of Justice officials warned of a “chronic lack of space” to house newly-arrived refugee applicants. Photograph: Cyril Byrne

The housing crisis affects large swathes of the population, so it is no surprise that refugees – one of the most vulnerable groups in society – are also hit by the shortage of affordable places to live. As of last June, almost 600 people who had been granted asylum here were still in the direct provision system – an increase of almost 50 per cent in 18 months. That means more than 10 per cent of those living in asylum-seeker accommodation centres have already been given legal status in the State but cannot leave because they are unable to find suitable or affordable housing elsewhere.

Combined with the fact that asylum applications are increasing, and that more and more asylum seekers are taking up the State’s offer of accommodation, this has left direct provision at nearly full capacity. In documents released to this newspaper under the Freedom of Information Act, Department of Justice officials warned of a “chronic lack of space” to house new applicants. The pressure is so acute that, earlier this month, the department was unable to offer immediate accommodation to some single men seeking asylum and had to refer them to homelessness services. Two previously closed accommodation centres, in Killarney and Carrick-on-Suir, have reopened due to what the department calls an “urgent and immediate need” for beds.

One of the anticipated benefits of the Government’s decision to open the labour market to asylum seekers was that more refugee applicants would be able, with an independent income, to move into private housing. For most asylum seekers, however, that is a forlorn hope. The housing crisis means many more people will be forced to live for lengthy periods in a system that countless studies have shown to be unsuitable for protracted stays. It is a good example of how a failure of Government policy in one area can hold back or reverse progress elsewhere. Ultimately, the only way to fix the mess is to increase the supply of social and affordable housing. In the meantime, the Government must act urgently to improve conditions in the direct provision network.

Old favourites
Liquidity crisis
The new normal?
Children must not be left behind
Remembering Jack Charlton
Polling numbers for FF are ominous
Cars in the Phoenix Park
Reopening of schools
Too many hats for Catherine Martin?
Forestry and the environment

1 David McWilliams: ‘Ireland is three decisions away from being a perfect country’
2 California shuts down again as US coronavirus cases surge
3 Maureen Dowd: Biden has his limitations but he’s no Trump
4 Covid-19: 200 to 250 people arriving in Ireland from US daily - Coveney
5 US passengers fly into Dublin: ‘I’m here for six days. I guess I’ll have to stay inside’
Real news has value SUBSCRIBE