The Irish Times view on the state of the EU: a crisis foretold 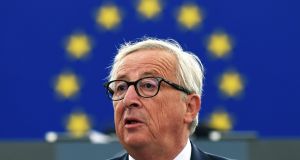 In his final state of the union speech as European Commission president, Jena-Claude Juncker set out 18 new ideas – many of which seemed like direct retorts to the EU’s critics. Photograph: Frederick Florin/AFP/Getty Images

Jean-Claude Juncker didn’t explicitly mention Hungary in his state of the union speech in Strasbourg on Wednesday. Nor did he deal at any length with the broader populist revolt that has shaken politics across the continent. But the rise of far-right demagogues informed everything the president of the European Commission had to say.

In a speech that focused on the EU’s place in the world, Juncker set out 18 new ideas. Many of them seemed like direct retorts to the EU’s critics. To protect borders from illegal migration, he proposed strengthening the EU border guard and giving it an extra 10,000 staff. On Russian interference, political parties could be sanctioned for misusing voter data so that the integrity of elections could be safeguarded. Calls for more sovereignty? The EU would give back powers to national governments when that made sense. Juncker’s big example – allowing states to “take back control” of their clocks by eliminating daylight-saving rules – is unlikely to quell the chest-thumping ardour of the committed nationalist, but the broader thinking is sound.

Yet defensiveness cannot be the EU’s only register in taking on the far-right. As Juncker implicitly recognised, the bloc must live by constant forward motion. Thus, he spoke of an EU-Africa trade deal, internationalisation of the euro and an anti-money laundering push. “We will always be a global payer but it is time we started being a global player too,” he said, alluding to the disparity between the EU’s economic strength and its stature as a political actor on the world stage. But to achieve that would require greater internal unity, and so Juncker proposed moving to qualified majority voting in specific areas of foreign policy. Another Juncker favourite – removing the national veto on tax – made an appearance, but there appears no immediate prospect of that happening.

Juncker’s mantra is that the EU will be small on the small things and big on the big things. That’s about right. There is greater scope for collective action and coordination in many areas. To stand still would be a fatal mistake. And Brexit, for all the problems it will bring, also offers an opportunity to recast the EU and improve its cohesion.

The problem, of course, is that which Juncker chose not to mention by name. Within hours of the state of the union speech, the European Parliament took the unprecedented step of rebuking Hungarian prime minister Viktor Orbán over possible breaches of EU rules and values. Hungary’s slide towards authoritarian rule drives at the heart of the European project in a way that Brexit doesn’t even come close to doing. It is already freezing EU action in some spheres and impeding its ability to speak with one voice in others. In the longer-term, it threatens to unwind some of the principles and ideas on which the entire EU edifice is built.