The Irish Times view on North Korea: playing Trump like a violin 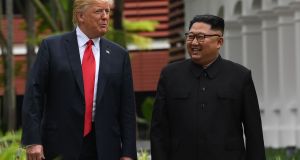 Three months after their landmark summit in Singapore, Kim Jong-un continues to play Donald Trump like a violin. That meeting was a coup for the dictator in Pyongyang, giving him global credibility, tightening his grip on power, reducing the threat of a US-led attack and raising the prospect of new flows of financial aid. All of that came at virtually no cost to Kim. His only concession was barely a concession at all: a vague pledge to work towards the denuclearisation of the Korean Peninsula.

North Korea is still reaping the dividend. Just this week, Chinese president Xi Jinping sent a senior official to Pyongyang, and bilateral trade between the two countries continues to flow.

Against this background, the growing signs of frustration with North Korea in Washington in recent weeks were a problem for Kim. A shift in the climate could be seen in Trump’s decision to call off a planned trip to Pyongyang by his secretary of state, Mike Pompeo. And in comments from the hawkish national security adviser, John Bolton, who expressed doubts about Kim’s willingness to abandon his nuclear weapons.

Knowing of Trump’s susceptibility to flattery, Kim’s latest overture was a letter – “very warm, very positive”, in the words of press secretary Sarah Sanders – asking for a second meeting between the two men. The Trump administration immediately agreed.

It’s better that Trump and Kim are exchanging pleasantries than threats, of course. But there is no evidence that Pyongyang has taken any meaningful steps towards eliminating its nuclear arsenal. Trump appears to believe that when Kim talks about denuclearisation, he means giving up his own weapons. In fact, all he has signed up for is a vague aspiration for a nuclear-free region – one that would include the removal of the US nuclear umbrella over South Korea.

Another pointless summit will further strengthen Kim’s position while undermining those elements in the Trump administration who see that Trump is being played by a far more strategically-minded opponent.