Irish Times view on housing: No time for political caution 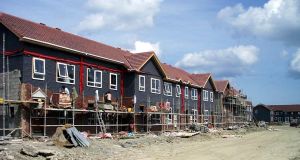 Public dismay over the number of homeless families and a shortage of affordable housing has put the Government under pressure.

A lack of detail concerning the powers and responsibilities of the proposed Land Development Agency is a cause for concern. Grandiose declarations that 150,000 new homes will be delivered by the new State agency during the next 20 years fail to impress.

Legislation to establish the agency on a statutory basis has not been published and it appears not a single new home will be completed before 2020. The social and affordable housing content seems to be flexible and there is a worrying dependence on property developers.

Public dismay over the number of homeless families and a shortage of affordable housing has put the Government under pressure. Sinn Féin is expected to submit a motion of no confidence in Minister for Housing Eoghan Murphy when the Dáil resumes. That may account for the rushed announcement of the agency without greater detail. Its social and affordable housing targets have been criticised by Fianna Fáil and Sinn Féin and may struggle to receive Dáil approval.

The cost of sites, driven by wild west-style rezoning decisions and windfall profit making, represents the main dysfunctional element within the housing market. Addressing this issue in 1973, the Kenny report recommended that local authorities should be permitted to acquire agricultural land at a reduced cost for public housing. Successive governments did nothing. More recently, this approach was approved by a joint Oireachtas committee on the Constitution and, last April, was recommended in a report on housing by the National Economic and Social Council.

Broad similarities exist between the NESC report and the Government’s current approach. The Land Development Agency will be encouraged to bypass land-hoarders and speculators and acquire State-owned properties and appropriate sites near transport systems. Compulsory purchase could be used in assembling these sites. And, according to the NESC, it would be “desirable for a public body to purchase brownfield sites and other land in advance of rezoning”.

Having examined housing policies in Europe, the NESC suggested affordability or cost rental should be built into the system, at a level of 30-40 per cent of gross family income. Sites should be developed on a strictly “use it or lose it” basis and a more active land management policy should be pursued. Its proposed rental costs were much lower than those envisaged by Government.

Research at the Department of Public Expenditure found it would be a lot cheaper for the State to build, rather than rent, social housing. Providing cheap State-owned land for developers, as an incentive to provide social and affordable housing on less than half of the available site, will not seriously threaten a broken housing system. There are times when political caution is a virtue. This is not one of them.