The Irish Times view on Sweden’s election: take the fight to the populists

The centre has held, but the far-right is not going away 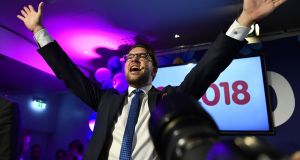 Is the glass half-full or half-empty? It’s a question prompted by almost every European election of the past two years – a period that has seen the populist right make big advances but also revealed admirable resilience among defenders of the liberal democratic order.

Optimists point to Emmanuel Macron’s rise in France, to Geert Wilders’s lower-than-expected vote in last year’s Dutch election, to the defeat of a far-right candidate for the Austrian presidency and to Angela Merkel’s staying power. At the same time, however, ultra-nationalist forces have seen their votes increase in all of those countries. That has pushed government policy rightwards. In Germany, a hard-right party with neo-Nazi origins is the chief opposition force. Poland and Hungary are led by avowed opponents of liberal democracy. Macron may have been victorious in 2017, but the Front National continued to increase its support and the centre-left was virtually wiped off the political map.

Half full or half empty? The same question arises in the wake of the Swedish general election, which left the two main parliamentary blocs tied but well short of a majority. The story of the election campaign was the rise of the Sweden Democrats (SD), an extreme anti-immigrant outfit, whose support some pre-election opinion polls put on 25 per cent. In fact it won 17.6 per cent in Sunday’s vote.

The absence of a far-right breakthrough on the scale that many feared, combined with the stronger-than-expected performance from the ruling Social Democrats, was greeted with relief by some. Naturally it’s welcome that four in five Swedes shunned the far-right. For now at least, the centre has held. But that should not blind us to the warning Swedish voters have delivered. A party with neo-Nazi roots has increased its support from 0.4 per cent in 1998 to 17.6 per cent today. The Social Democrats had their worst election in a century.

In an attempt to address the concerns that the SD feeds off and exploits, the current government has tightened the immigration regime since 2015. But there is no reason to believe, yet at least, that SD support has hit a ceiling. If whatever minority government that emerges from the coming talks relies on SD votes for its survival, then the populists will have an influence on policy without having to take on the responsibility of power.

Swedish liberals must apply the lessons their counterparts elsewhere have already learned. They need immigration policies that take account of voters’ concerns. But, more importantly, they need to take the populists on. One by one, they must refute their spurious claims. They must expose their platforms for the hateful and self-defeating agendas they are. And they must constantly make and re-make the case for the ideology that turned Sweden into one of the best places in the world to live.