Time to ditch our single-use mindset

One Change: From plastic bottles to paper bags, our huge reliance on throwaway items needs to change 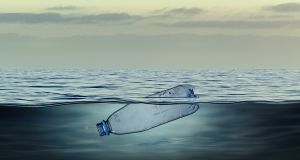 Plastic bottle, pollution that floats in the ocean.

Face masks and latex gloves have already started washing up on shorelines – our new reality manifesting in the form of marine litter. The continued demand for personal protective equipment means there will be more of it, no doubt, to add to all the other plastic floating in the sea.

While the pandemic has had some, short-term positive effects on the environment – with cleaner air and less traffic – there is growing concern about its impact on ocean pollution. Fly-tipping and littering has become a worry as restrictions have eased and more people are out and enjoying beauty spots. In Britain, meanwhile, the clean-up following the scenes in Bournemouth, where thousands flocked to the beaches, was staggering – officials collected 50 tonnes of rubbish in one day.

Plastics make up 80-85 per cent of marine litter on European beaches. And that litter costs the European economy between €259 million and €695 million a year, not to mention being hugely damaging to marine and coastal biodiversity. The European Union has a list of 10 single-use plastic items that are to be banned by 2021 – including plastic stirrers, straws and more – but part of the change must be an examination of our obsession with single-use items. While it’s great to see alternatives to plastic – such as biodegradable coffee cups and takeaway food containers – they often seem to reinforce our huge dependency on throwaway materials.

Take shopping bags for example. While many of us bring reusable cotton or plastic ones to the supermarket; when it comes to buying items such as clothes or books we take home a paper one every time. A paper bag is easily recyclable but it’s not very reusable – particularly if it rains. As a result, many of these paper bags end up being used only once. It is less carbon intensive to produce a paper bag than a plastic one – and more trees can be planted sustainably to replace the ones used up – so they are a better option than plastic.

However, often we use them so casually – and shops do not charge for them – that their environmental costs go unchecked. So, next time you’re planning to go out wandering the clothes aisles, bring a cotton bag with you.

As for face masks – we’ll be using them for a while yet, so invest in some reusable ones, if you can. The advice from the World Health Organisation and the Health Service Executive is to wash them daily, with soap or detergent, in hot water.