Space as a giant bin? The problem with orbital debris

One Change: Litter in space is a growing problem, and represents a long-standing indifference to caring for the environment 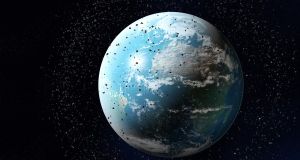 There are 23,000 pieces of large debris in Earth’s orbit, according to Nasa.

Ever heard of space junk? You might remember the dizzying scene in the movie Gravity, where Sandra Bullock is sent spinning into the blackness after their spacecraft is hit by a swarm of debris. These dangerous bits of metal zipping through the atmosphere are no fictional plot twist – they are the very real remainders of space exploration, or what happens when we send satellites up into the Earth’s atmosphere and don’t clean up afterwards.

This collection of man-made rubbish is roughly 2,000km away from the Earth’s surface and is made up of derelict spacecraft and satellites – or their parts. Space junk can include anything from motors to nuts and bolts or lens caps, and can vary in size, from tiny flecks of paint to huge chunks of metal. Anything bigger than 10cm is classed as large debris and, according to Nasa, there are 23,000 pieces of large debris in Earth’s orbit. As of January this year, the amount of space litter exceeded 8,000 metric tonnes.

Satellites provide us with lots of useful information such as weather forecasts or Google maps, but there are less useful items sent to space, such as Elon Musk’s sports car, which was criticised for adding to the problem of space debris.

While some bits of space litter may burn up in the atmosphere after time, the big worry comes from the risk of collisions. Space debris can travel of speeds up to 28,000km per hour – that’s roughly seven times faster than a speeding bullet. Collisions at such a fast pace can cause quite a bit of damage, particularly to operational satellites. And while Nasa tracks many of the larger bits of debris, it is difficult to predict collisions. In 2009, for example, two satellites collided, creating a massive cloud of debris.

Though there is very little you or I can do to reduce the amount of space junk, there are many interesting projects working to reuse or remove bits of debris with giant magnets or harpoons, or to reduce its build-up by sending much smaller satellites into Earth’s orbit. But the issue is a bit like the plastics filling our oceans or the air filling with carbon dioxide; space debris represents a long-standing indifference to our environment. And though we may not be able to see it from here, all that space junk spinning through the atmosphere is just another reminder of the gargantuan impact we are having on the planet – and beyond.