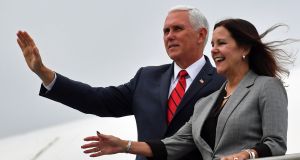 While the courtesies were maintained during the two day visit of US vice president Mike Pence to Ireland it clearly did not go very well. Photograph: Jacob King/PA Wire

Although the courtesies were maintained during the two-day visit of US vice-president Mike Pence to Ireland, it clearly did not go very well. Cold politics triumphed over warm words as Pence followed President Trump in openly indicating his support for British prime minister Boris Johnson’s approach to the Brexit negotiations.

Johnson has set out deliberately to blame Ireland for the political chaos in the UK and attempted to scapegoat Taoiseach Leo Varadkar for defending the Belfast Agreement and the integrity of the EU single market.

The Taoiseach maintained a dignified demeanour as his US guest positioned himself on the side of Johnson and his Brexit policy and had the effrontery to call on the EU to negotiate in good faith when it has done precisely that in the face of brazen dishonesty from the Brexiteers.

Pence was of course only echoing his master’s voice in supporting Johnson and denigrating the EU. A central element of Trump’s policy is to do everything he can to encourage the break-up of the EU. Support for the hardest possible type of Brexit is part of a strategy designed to weaken the EU and ultimately destroy it.

Varadkar rightly pointed out to Pence the impact that a hard border would have on the island of Ireland, particularly the danger it would pose to the gains linked to the Belfast Agreement, and told his visitor that was why Ireland and its EU partners would stand their ground. Reports suggest that the vice-president and the Taoiseach had a more amicable discussion in private about the role of the US as guarantor of the Agreement.

Aside from the public difference of opinion over Brexit, the wide divergence of views on issues such as gay rights and immigration was impossible to ignore. The presence of the Taoiseach’s partner at the lunch for Pence and his family pointed that up in no uncertain manner. The vice president has affection for this country and is proud of his Irish ancestry, but his views are anathema to a majority of people in modern Ireland. There is no reason to gloss over that.

1 A vegetarian and a non-drinker visit Ireland: here’s their verdict
2 Eyewitness to Auschwitz: ‘We were held in the wagons like animals’
3 Is Ireland moving left or simply moving on?
4 Dublin ranks 120th out of 150 cities for raising a family
5 Who are Ireland’s 17 billionaires?
Real news has value SUBSCRIBE