The Irish Times view on the HSE capital plan: can it really be implemented? 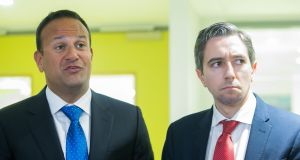 Taoiseach Leo Varadkar and Minister for Health Simon Harris at the launch of the HSE capital plan at the National Rehabilitation Hospital in Dún Laoghaire, Co Dublin on Monday. Photograph: Gareth Chaney/Collins

The long overdue publication of the Health Service Executive (HSE) €2.1 billion capital plan until the end of 2021 is welcome but it begs many questions. For a start, why has the full detail of the plan been published only now when we are already nine months into it?

One of the big issues is how all of the key targets for health spending are going to be met in the light of the massive overrun in the cost of the national children’s hospital. An additional €100 million had to be found to cover the cost of the project at St James’s Hospital this year with €24 million coming from the Department of Health and the rest sourced from other government departments. Further allocations of more than €100 million a year will be needed in 2020 and 2021 to offset the increased cost of the €1.7 billion project.

Taoiseach Leo Varadkar was adamant that none of the hundreds of other capital projects, large and small, will be cancelled as a result of the problems at the children’s hospital. But only a few months ago the HSE itself warned that it would be impossible to deliver some investments in healthcare because of those cost overruns.

With the children’s hospital needing an additional €100 million-plus in each year of the plan, it is not clear how all the deficit is to be made up. What is clear, however, is that the Government’s 10-year capital spending plans for health are not front-loaded, as Minister for Health Simon Harris and the HSE wanted them to be.

The Taoiseach insists that other projects will not be cancelled because of the children’s hospital debacle and, hopefully, he is correct. But the public will take some convincing and the Opposition will be watching carefully to see if all of the commitments in the plan are realised.

Big ticket items include an allocation of more than €1 billion for the key projects which are the children’s hospital, the National Rehabilitation Hospital, the relocation of the Central Mental Hospital from Dundrum to Portrane, and radiation oncology facilities in Cork, Galway and Dublin.

The plan also provides for 480 new hospital beds, 30 new primary care centres, 58 community nursing units, as well as additional mental health and disability projects, and an upgrade in the ageing ambulance fleet. All are due to be provided over the next three years.

These spending plans are clearly worthy and will be welcomed by service users but there must be serious doubts about the capacity of the Government to implement them.

Health has been an election issue for the past four decades. The Government’s handling of it – in tandem with the questions raised about its competence by the cost over-run at the children’s hospital – mean it is bound to feature again in the next one.