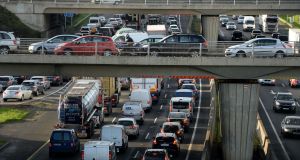 An Environmental Protection Agency report shows that EU air pollution limits are being repeatedly breached in Pearse Street as well as at the entrance to and exit from the Dublin Port Tunnel, along the M50 and in the vicinity of Heuston Station. Photograph: Alan Betson

It will come as no surprise to Dubliners that air pollution in the city is much worse than previously thought. Anyone who walks down heavily-trafficked Pearse Street, for example, would be aware that the air they’re breathing is contaminated by the tail-pipe emissions from cars, vans and buses belching out diesel soot particles and nitrogen dioxide. Now this anecdotal evidence has been confirmed by an Environmental Protection Agency report showing that EU air pollution limits are being repeatedly breached in Pearse Street as well as at the entrance to and exit from the Dublin Port Tunnel, along the M50 and in the vicinity of Heuston Station.

A joint statement from Minister for Climate Action Richard Bruton and Minister for Transport Shane Ross expressed “grave concern” about the findings and promised “immediate action [to] improve the air quality in Dublin”. This would include the designation by local authorities of “low emission zones”, as well as imposing disincentives on the purchase of diesel cars, supporting the transition to electric vehicles and investing more in cleaner buses. All of these measures and more are to be spelled out in detail in the first national Clean Air Strategy, which the Ministers said would be published later this year.

In London, where traffic-related air pollution is even more severe, it has been estimated to cause 9,500 premature deaths per annum, mainly among elderly people, while children’s health is also threatened by poor air quality around some 800 primary schools. Strong measures are now being planned in London to curtail traffic in the worst affected areas, aided by a public awareness campaign that includes an interactive Real-time Air Quality Index Visual Map, which allows people to check on air pollution levels throughout London. The same technology has been deployed in Paris, which holds the dubious honour of having the most polluted air of any city in Europe – something that its progressive mayor, Anne Hidalgo, is determined to reverse. Dublin needs a similar real-time map to highlight how bad the air has become in certain parts of the city. Urgently.

1 Dublin stabbing: Parking space was at centre of previous rows, gardaí told
2 Gordon D’Arcy: Change was advisable before Twickenham; now it is inescapable
3 People often ask me why I never want to go back to Ireland
4 Varadkar declines to negotiate with Fianna Fáil on forming government
5 Could Ireland put towns under lockdown if coronavirus arrived?
Real news has value SUBSCRIBE