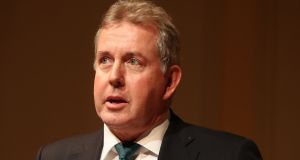 In reporting his analysis of the Trump’s administration, Kim Darroch, the British ambassador to the US, was doing exactly what he is paid to do. Photograph: Niall Carson/PA Wire

Donald Trump’s White House is inept, dysfunctional and riven by factions. The US president himself radiates insecurity. Scandal could cause his administration to implode. Yet he could just as well win re-election next year.

Never have such banal political observations caused more of a fuss. The insights above, taken from leaked diplomatic cables written by Britain’s ambassador to the US, Kim Darroch, are – compared to much of the public commentary on the Trump White House – mild almost to the point of being anodyne. That’s not how Trump himself saw it, of course.

Unwittingly proving Darroch’s point about his insecurity, the president tweeted that the ambassador was “a very stupid guy” and that “we will no longer deal with him”. Trump may not have been formally declaring Darroch persona non grata, but the effect of such a public rebuke is to make it very difficult for the ambassador to do his job in Washington.

Yet the worst possible reaction from the British government would be to recall Darroch. In reporting his analysis of the Trump’s administration, he was doing exactly what he is paid to do. Governments don’t get to choose other countries’ ambassadors. Withdrawing Darroch now would be a craven move – at once humiliating a well-regarded envoy and serving the agenda of whoever leaked his correspondence. Darroch had already signalled his intention to step down at the end of the year. He should be allowed to see out his term.

He could even repair his broken relationship with the White House. Many Republican politicians, most memorably Lindsey Graham, said far worse than Darroch about Trump only to find themselves in the president’s inner circle after later saying nice things about him in public. That should reassure London that some quick, smart diplomacy can mend a difficult situation.

The most important thing about Darroch’s leaked dispatches is what they tell us not about the White House but about the British government itself. Assuming the leak originated within the London system itself, it underlines once again the scale of the malaise in an administration torn apart by the Brexit debacle.

The civil war that has split the main parties and poisoned the country’s political culture has also debased its civil service. British diplomats, asked to do the impossible by reconciling mutually exclusive red lines, succeeded in negotiating a workable plan for the UK’s exit from the EU – only to be vilified by their own political masters and, in some cases, moved out of their jobs due to insufficient faith in the cause.

Inept, dysfunctional, riven by factions. That was Darroch’s assessment of the US government. But as the leak of his words reminds us, he might as well have been describing his own.