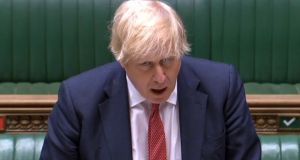 Entering a new phase in the pandemic response undoubtedly requires a tweaking of the official message. And Boris Johnson delivered that to the UK on Sunday night. The new mantra, the British prime minister said, would be “stay alert, control the virus, save lives”. But what does it mean? And how does the key new element, “stay alert” relate to the “stay at home” advice which it succeeds but does not apparently replace?

That ambiguity was explained away by British ministers in the hours after the Johnson speech with a formulation that went along the lines: “We want people to go to work if possible, but want as many as possible to stay at home”, a mixed message that reportedly reflects divisions in the cabinet. “Stay alert” means maintaining social distancing, washing hands, and staying at home – in effect, doing all the things which have been required until now.

The very fact that 24 hours of explanations were necessary suggests the new message is lacking a key ingredient of such vital instructions: clarity. And Johnson’s confusing language was compounded by a failure to explain how workers were to return to work by means other than public transport. Or how employers were to reconfigure workplaces to maintain a safe environment.

The clarification that the two-metre social distancing rule should be applied “where possible” in the workplace served to suggest a worrying, unexplained shift in priorities from health to economic concerns. It’s an assumption that may well be behind the refusals of the devolved governments of Scotland, Northern Ireland and Wales to follow suit. First minister of Scotland Nicola Sturgeon warned that dropping the “stay home” message could have “catastrophic” consequences north of the border and ordered Scots to follow different advice on outdoors exercise.

1 Warning of serious brain disorders in people with mild coronavirus symptoms
2 Airborne coronavirus: What you should do now to help yourself stay safe
3 Mary Trump’s book: Eight of its most shocking claims about the US president
4 How fraudsters used lockdown to lure Irish victims into boats and caravans scam
5 One million people have now downloaded Ireland’s Covid-19 tracker app
Real news has value SUBSCRIBE