The Irish Times view on botched Venezuela coup: After the raid 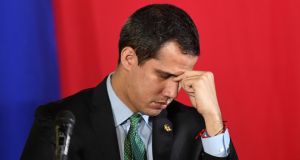 The raid, which had all the hallmarks and incompetence of the CIA’s abortive Bay of Pigs fiasco against Castro’s Cuba, was organised by Jordan Goudreau, a former US special forces veteran and founder of Silvercorp, a Florida-based security firm, ostensibly to arrest and abduct Maduro. His previous plans for an armed invasion had been endorsed last October, but then abandoned, by the opposition under Juan Guaidó, recognised by some 50 states (not Ireland) as the country’s legitimate president.

Venezuelan forces killed eight men in the first of two attempted landings, and 50, including two ex-US marines, have been arrested. Goudreau remained in Miami.

Although Guaidó vehemently denies any involvement in the raid, two senior aides quit on Monday after admitting they signed the agreement with Goudreau which outlined a previous potential “operation to capture/detain/remove” Maduro “and install the recognised Venezuelan president Juan Guaidó”.

The aides said it was just one of several options they considered and that the plan fell apart within weeks because Goudreau proved unreliable.

The US State Department has denied any “direct involvement”.

Maduro has since been bragging about defeating “an assassination plot” backed by the Trump administration, has paraded the two captured Americans on TV and is threatening to arrest Guaidó.

For Venezuelans, in their seventh year of economic calamity, now exacerbated by a collapse of oil prices, a new round of hyperinflation, with four million refugees in exile, and blighted by a pandemic the country can ill afford to fight, the news means one thing – Maduro is not going away.