The Irish Times view on test-and-trace: the State faces a race against time 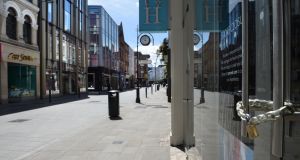 Imposing a lockdown is the easy bit. Shutting everything down is a crude, simple yet effective way to break the transmission of an infectious disease in the community. But it is also unsustainable. And the system to replace it – a better adapted, targeted and rapid way of monitoring the virus and halting its spread – is much more difficult to design and implement.

Test-and-trace is vital to such a system. Those states that do it best, such as South Korea, have, notwithstanding limited resurgences, managed to bring their epidemics under control while maintaining many aspects of normal economic life. Those that fail, or don’t even try, such as Britain, suffer the consequences.

We know that when restrictions ease here over the coming months, Covid-19 will still be with us. Perhaps thousands of cases will remain on May 18th, the next staging post on the road to normalisation, and many of them – perhaps even half, if the State’s modelling assumption is correct – will be asymptomatic. In order to identify those cases and break each chain of transmission, we will need to focus on two things: information and speed. In other words, the State must have a system that tests and delivers results quickly (a 24-hour turnaround time from swabbing to result should be the target), then uses that information rapidly to isolate affected individuals and their contacts.

Clearly, the State is not there yet. And that is worrying. Important progress has been made on testing, with the HSE on course to reach capacity for 15,000 tests a day this week. But while chief executive Paul Reid says the average time to get a test result is 2.4 days, GPs report waits of up to five days. There have also been reports of patchy and inconsistent contact tracing. If the lockdown were to ease today, it seems unlikely we could keep the virus at bay for very long.

It won’t be enough merely to test suspected cases, however. We must be in a position to carry out mass random testing that would pinpoint asymptomatic cases and help us map the behaviour of the disease. Another vital tool will be antibody testing, which will help to tell us how prevalent the virus has been and how much immunity – assuming infection confers some level of immunity – we have in society.

As soon as some semblance of normal life resumes, we will face a daily race against Covid-19. The stakes could hardly be higher. If the State succeeds in building a system that can hunt and corner the virus everywhere it goes, and manages to keep it under control until we have a vaccine or treatments, then we can dare to hope that the end to the current trauma is in sight. But if it fails, another lockdown – perhaps several – will be required over the coming year, at a human and economic cost that would make the past two months look like a mere prelude to the coming disaster.

1 Warning of serious brain disorders in people with mild coronavirus symptoms
2 Mary Trump’s book: Eight of its most shocking claims about the US president
3 Airborne coronavirus: What you should do now to help yourself stay safe
4 Newton Emerson: North’s parties tired of second-guessing shadowy forces behind Sinn Féin
5 Storey funeral highlights fundamental problems with Sinn Féin
Real news has value SUBSCRIBE