The Irish Times view on postwar Europe at 75: no end to remembering 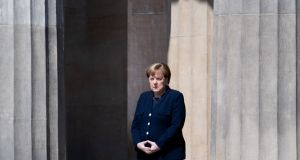 German Chancellor Angela Merkel attends a wreath laying ceremony to mark the 75th anniversary of the end of the second World War, at the Neue Wache Memorial in Berlin on Friday. Photograph: Filip Singer / Pool/ EPA

Ceremonies to mark the end of the second World War, 75 years ago, come at a parlous moment for European integration. The greatest conflict in human history cost 85 million lives – but created the world’s greatest peace project. Now the pandemic that reduced memorial events to a minimum is testing the European Union to the maximum.

After a decade of crises, Covid-19 has set EU member states against each other once more, competing for life-saving treatments and protective equipment. On Saturday, German president Frank Walter Steinmeier said there could be “no end to remembering” the horrors his country unleashed on the world under the Nazis. It is timely, then, to remember why the euro was established: as part of a process aimed at ensuring those sharing the currency would never again go to war against each other. The single currency’s custodian, the European Central Bank (ECB), was set up to German specifications, in the mould of its own politically independent Bundesbank with a narrow, inflation-fighting mandate.

This week Germany’s constitutional court ruled that the ECB – over which it has no legal competence – is too independent, and questioned the legitimacy of its emergency measures to stabilise the single currency. Alarm bells are now ringing around Europe. Wolfgang Schäuble, the last of Germany’s war generation politicians, urged EU members to find a way to keep the ECB within its mandate, which many Germans perceive it is not doing, or risk further rulings from other member state courts in which “the basis of the euro is called into question”.

Covid-19 has returned the euro’s unresolved dilemma – currency union without economic union – to the agenda. Demands from one half of the euro area, to pool the bloc’s economic heft for lower-interest emergency loans, will be blocked by the other half unless they come with the insurance of closer integration of national budgets and fiscal policy. Dr Schäuble warned there is only one way to keep the peace in the EU: “make even more political effort to strengthen Europe”.