The Irish Times view on the economic outlook: Slowing down 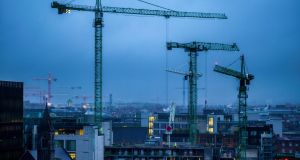 As our cities – particularly Dublin – become clogged, it is remarkable that growth is still continuing at such a rapid rate. Photograph: John Ohle

The Irish economy has defied expectations over the past couple of years, with growth continuing at a rapid rate, despite forecasts that the rate of expansion would ease. Now Ibec, the business lobby group, has said it expects the GDP growth rate to fall to around three per cent next year, due in large part to pressures growing in housing, transport and childcare. These issues are causing increasing problems for businesses in attracting employees and planning for growth. At a wider level, these issues also told against Fine Gael in the weekend byelections, particularly the housing crisis.

There is no quick fix in these areas. But while housing supply is starting to rise and the Government has just announced new investment in the rail network, voters are not convinced that it has got a grip on these major problems. Ibec, meanwhile, points out that its members are telling it that skill shortages in some areas, combined with housing and childcare problems, are making it difficult for them to hire new employees. In some areas, the economy is at, or near, full capacity.

Solutions here tend to go beyond the normal election cycle. The Government has set out its plans in its long-term investment programme, but turning these into reality is a slow process and the ongoing pressures in areas like homelessness and the health service show little sign of abating.

These issues are vital for competitiveness, as Ibec points out. As our cities – particularly Dublin – become clogged, it is remarkable that growth is still continuing at such as rapid rate. But they also have a wider importance – with a vital impact on people’s lives and on the goal of building a sustainable and fair economy.

The Government’s management of the economy has delivered strong growth and improvements in the public finances – as reflected in the recent upgrading of Ireland’s debt by rating agency Standard and Poor’s. It has also boosted investment significantly. But it has yet to show that it can deliver the kind of key improvements which should be starting to become evident, given the increased spending seen in recent years.