The Irish Times view: Byelections provide boost for the Opposition 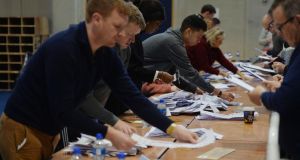 The Fianna Fáil victory in two of the four byelections has given the main Opposition party a timely confidence boost in advance of the next general election, which is widely expected to take place in the first half of next year.

The first ever byelection win by the Green Party indicates that it is on course for a substantial increase in its Dáil numbers – it now has three TDs – and a likely place in the next Government, while the Sinn Féin triumph in Dublin Mid-West will come as a huge relief to party after its unexpected slump in the local and European elections last May.

A majority of voters in the four constituencies clearly took the view that it did not matter much who won, so they didn’t bother to go to the polls

The lacklustre performance of Fine Gael will bring home to the Government party just how difficult a task it will face in attempting to retain power next year. The modest recovery for the Labour Party will give it some hope that it can capitalise on the drop in support for the hard left and Independents of various hues.

Yet it would be a mistake to read too much into the results. The most startling feature of the byelections was the miserable turnout of voters in all four constituencies. It was less than half that at the last general election. This is partly explained by the fact that the outcome had no implications for the future of the Government. A majority of voters in the four constituencies clearly took the view that it did not matter much who won, so they didn’t bother to go to the polls.

A substantially higher turnout can be expected in the general election, but the clear message for all of the parties is that they have a job on their hands to enthuse voters about their vision for the future. Even the parties that won byelection seats cannot take too much for granted.

Fianna Fáil’s victories in Wexford and Cork North-Central were tempered by the party’s poor performance in Dublin, while the reverse was the case for the Greens, indicating that the party may struggle to mount a fight for seats beyond suburban Dublin.

A reassuring feature of the Wexford result was that the dangerous comments about immigration uttered by Fine Gael candidate Verona Murphy did not generate popular support and, if anything, damaged her prospects. The Fine Gael vote was roughly in line with its general election performance but it was not boosted by the candidate’s foolish utterances. The fact that Labour candidate George Lawlor passed her out on transfers to take second place on the final count was a statement by the voters of Wexford.

The failure of Lorraine Clifford-Lee to win a seat for Fianna Fáil in Dublin Fingal also sent out a message that there is no electoral advantage to be had from making derogatory comments about minorities. Hopefully, the misguided comments of Murphy and the tweets by Clifford-Lee will prove to be an aberration in Irish politics.