The US president has betrayed the Kurds, cemeted Assad’s hold on power and breathed new life into Islamic State 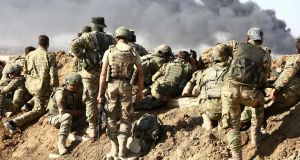 Turkish troops and Turkish-backed Syrian rebels gather outside the border town of Ras al-Ain on Saturday, during their assault on Kurdish-held border towns in northeastern Syria. Photograph: Nazeer Al-Khatib/AFP via Getty Images

Donald Trump says he will support imposing tough sanctions on Turkey for doing something he facilitated Ankara to do last week. The US president’s hopelessly confused message is no doubt partly a result of his own surprise at the backlash within Republican ranks over a decision that enabled Turkish president Recep Tayyip Erdogan to invade northern Syria and establish a “buffer zone” along the border. But it is also of a piece with an ill-considered, self-defeating decision that harms America’s interests and puts thousands of lives at risk – all so that Trump can claim to be making good on his campaign promise to extricate US troops from “endless wars”.

The only surprising thing about the descent into chaos that Trump’s decision precipitated is how quickly it has happened. Having been betrayed by their US ally after fighting – and dying – in a long and ultimately successful war against Islamic State, the Syrian Democratic Forces, a Kurdish-led militia, announced on Sunday it had agreed a deal with Bashar al-Assad, Washington’s sworn enemy, to jointly repel Turkish-backed forces advancing south. Those forces’ indiscriminate artillery fire is already spreading chaos in a region that had been relatively calm for more than a year. Islamic State stands to benefit from the new instability; hundreds of its supporters are said to have fled from one Kurdish-run detention camp in the region, and US troops reportedly left behind dozens of “high-value” jihadist prisoners as they fled the crossfire in recent days.

Trump is hardly the only blameworthy player. European states have refused to take back their Islamic State fighters, seeking to wash their hands of the problem. Russia and Iran have played destabilising roles in Syria for years, while Erdogan himself, having facilitated the growth of Islamic State, is now sending Syria back to the abyss. But Trump’s decision is a historic mistake. In one move, he has betrayed the Kurds, cemented Assad’s future, relinquished all US leverage in Syria, given Russia a strategic victory and breathed new life into Islamic State.

1 Gardaí disperse crowds gathered at coastal beauty spots
2 Coronavirus: Further two deaths in Republic as expert warns against ‘rush’ to ease restrictions
3 Normal People Class of 2020: The nine college friends in the series
4 Cork residents protest over students partying near UCC
5 Simple restorative exercises that can improve your posture after all the sitting
Real news has value SUBSCRIBE