US president pursues consistent policy to transform the transatlantic relationship 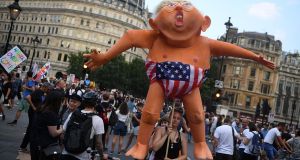 Protesters take part in a demonstration against US president Donald Trump’s visit to the UK, in Trafalgar Square. Photograph: Chris J Ratcliffe/Getty Images

Donald Trump’s visits to Nato and the UK this week have shocked Europeans with their direct attacks on allies and brutal lack of diplomacy in stating his America First agenda. Mischaracterising Germany as a puppet of Russia or the UK as a client of the EU attracts the headlines he craves as a leader and misleads many to dismiss him as a bullying narcissist. Yet he speaks as the US president pursuing a definite and consistent policy to transform the transatlantic relationship. This potentially historic shift comes as he is now in serious charge of his administration and gaining support at home.

Trump’s abrasive methods were on full display yesterday as he first told the Sun newspaper Theresa May did not take his advice on negotiating with the EU, would “probably kill” a trade deal with the US if the UK remains too close to Brussels and praised Boris Johnson who has just resigned from the British government.

At his press conference with May he rowed back on these comments, fulsomely commending her leadership skills, saying the US relationship with Britain remains very special and holding open a trade deal while lamenting the impact of immigration on European societies. May robustly defended herself and together they retrieved some of the earlier embarrassment. Yet his message of support for Brexit is in line with his hostility to the EU’s multilateralism dominated, he believes, by Germany.

On Nato there was a similar approach. Trump’s insistence that the US unfairly funds the alliance and that its European members must increase their spending to the agreed two per cent level or more met with a cold and confused response. Yet he claimed a negotiating triumph yesterday in Nato’s commitment to meet that target and said it is more united than ever.

His hostile focus on Germany remains, associated with the Nord Stream 2 gas pipeline from Russia and linked to the better trade agreement he wants on cars and access to the EU market for US liquefied natural gas.

The consistent thread through these events is a policy to change US relations with Europe. Nato is seen as a transactional field rather than an enduring relationship, while the Trump administration exploits Brexit to weaken the EU as a threatening economic and political competitor. Trump’s summit with Russian president Vladimir Putin in Helsinki on Monday will test and apply these policies further on nuclear proliferation, Iran, Syria and sanctions over Russia’s takeover of Crimea.

The changing US approach is a fundamental challenge to the EU as its interests and values diverge from those of a more assertive and self-centred US. Differences on trade, Iran, world climate and security require more EU unity and self-reliance if it is to be a major player in global affairs.