The Irish Times view on Britain’s approach to Covid-19: in search of a strategy

As Boris Johnson trumpets a wind-down of restrictions, a report commissioned by his chief scientific adviser warns that a second wave this winter could kill up to 120,000 people 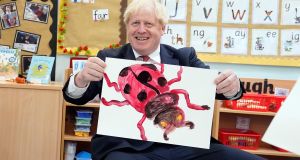 A “world-beating” tracker app that was due to be launched by Boris Johnson’s government in May didn’t work and has yet to materialise. Photograph: Andrew Parsons/ Downing Street/ EPA

Governments across the world are struggling to strike the right tonal balance on Covid-19. If leaders sound overly pessimistic, they risk undermining the national solidarity required to win adherence to public health guidance. Yet excessive optimism at a time of such manifest danger can also jeopardise public trust and will make it harder reimpose restrictions in the event of a resurgence of the virus.

Optimism, pluck and defiance-of-the-doubters resolve have always been central to Boris Johnson’s political persona, and have served him well – even when, as in the case of Brexit, such messaging is at odds with underlying realities. In the Covid-19 emergency, Johnson has struggled not only on policy, as evidenced in his government’s costly failure to lock down quickly and to put in place an effective test-and-trace system – but also in the rather basic yet vital task of clear public communication. The latest example of muddled messaging was Johnson’s suggestion last week that people should go back to work if they can – an intervention that contradicted his own government’s advice that they should work from home if possible.

The prime minister also spoke of his hope that Britain could “return to normality” by Christmas and set out a detailed reopening plan for the next six months that extended even to allowing people back in to sports grounds in the autumn.

As Johnson cheerily trumpets a wind-down of restrictions, a report commissioned by his chief scientific adviser warns that a second wave of coronavirus this winter could kill up to 120,000 people in the worst-case scenario. In fact, Britain’s easing of restrictions has been rightly cautious in recent weeks, and has succeeded in stabilising the infection rate. The UK has been reporting more than 100 deaths a day over the past week, and hundreds of new cases; these figures are high by European standards but much lower than at the first-wave peak in Britain the Spring.

But the British government still has serious work to do to suppress the virus in England, where it continues to spread. A “world-beating” tracker app that was due to be launched in May didn’t work and has yet to materialise. Johnson claimed last week that Britain’s belatedly-instituted test and trace system was “as good as or better than anywhere else in the world”, but it is only reaching three out of four of those who test positive and last month an independent group of scientists said it was not fit for purpose. This is of more than academic interest to Ireland, as the Common Travel Area means the island remains exposed in the event of a resurgence in England.

With 45,000 people dead, a stalled economy, a broken app, a middling test-and-trace system, a virus that continues to spread and a prime minister who seems at odds with his own scientists, England doesn’t need a “world-beating” strategy. One that works would do.