The Irish Times view on Covid-19: What the coalition should do next 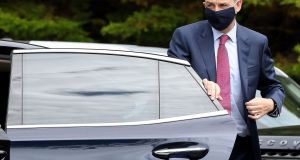 Taoiseach Micheál Martin’s decision to wear a mask in public is important. Such signals matter; every politician, in government and outside it, should follow suit. Photograph: Paul Faith/AFP via Getty Images

The transition from one government to another has been achieved with minimal disruption, both on policy or messaging, in the State’s approach to the Covid-19 emergency. The release of the coronavirus tracker app has been one of the most successful of its type in the world, with 1.3 million people having signed up to the tracing tool to date and most privacy concerns largely allayed. The app will be an indispensable tool in the coming months.

On face coverings, which the last administration was slow to promote, the Cabinet moved this week to make them mandatory in indoor spaces such as shops. That was important, as it had become clear that gentle if regular encouragement was not resulting in large-scale mask-wearing, and that it took the force of regulation to bring about a shift in behaviour on public transport. Also important has been the sight of Taoiseach Micheál Martin with his face covered while out and about. Such signals matter; every politician, in Government and outside it, should follow suit.

Confirmation that the virus reproduction number has now passed 1 is a sobering reminder that the disease is still among us and that the gains of recent months could easily be reversed. It was correct, then, to delay the reopening of most pubs and nightclubs until August 10th at the earliest. Nightclubs have been at the centre of a number of clusters in other countries, while physical distancing among drinkers in pubs will inevitably be difficult. The authorities should not hesitate to delay their reopening further. Quite rightly, the Government has set the reopening of schools as its priority. The rest of the reopening schedule should serve that primary aim, and if that means keeping clubs and pubs closed for another few weeks, so be it.

In three key areas, however, the Government has a lot of work to do. First, its imminent publication of a “green list” of travel destinations judged relatively safe will be difficult to reconcile, in many people’s minds, with its advice to avoid all non-essential travel. How it marries those two potentially contradictory messages next week will be important. Second, the public is entitled to more information on the status of the virus. While county-by-county breakdowns are available, there is no compelling argument for withholding more detail about the nature and general location of each outbreak and cluster. That information would help inform public behaviour and spread awareness of high-risk areas and activities. Finally, it’s vital that work continues behind the scenes to ensure our test-and-trace systems are ready to meet the challenge of the next phase.

Our hospitals are still vulnerable to a spike in infections, and our economy cannot take another large-scale shutdown. With responsible personal behaviour and a robust test-and-trace system, we can avoid a second wave.