As the US has reported a record 77,300 new coronavirus cases in 24 hours the US government confirmed that all schools will reopen after summer break. 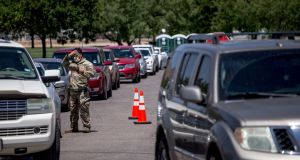 The US has reported a record 77,300 new coronavirus cases in a day, according to the Johns Hopkins University tracker, which relies on official government data.

The figure is the highest one-day total for the pandemic so far. The US has consistently broken one-day records in recent days, but this is by a fairly wide margin.

The US, by far the worst-affected country worldwide in terms of the number of cases and deaths, has 3,576,221 confirmed infections and 138,358 fatalities.

India’s cases of novel coronavirus crossed the million mark, the health ministry data showed on Friday, as infections spread out into the smaller towns and the countryside following the lifting of a vast lockdown.

More than half of all states in the US – 30 out of 50 – have reported record one-day increases in cases this month.

Florida reported a record increase of more than 15,000 new Covid-19 cases in 24 hours on Sunday, as the Trump administration renewed its push for schools to reopen.

If Florida were a country, it would rank fourth in the world for the most new cases in a day behind the United States, Brazil and India, according to a Reuters analysis.

Democratic officials have instructed senators, members of Congress and party delegates not to physically attend their national convention this summer, a sign of the ever-shrinking aspirations for their big campaign event in the face of a surge in coronavirus cases in the United States.

The directive, issued Thursday, ensures that little will happen at the convention site in Milwaukee beyond speeches from former vice president Joe Biden, his vice-presidential nominee and a handful of other top party leaders. The remainder of the events – state delegation meetings, parties, voting on the party platform and on Biden’s nomination – will happen virtually or not at all.

“We have been working closely with state and local public health officials, as well as epidemiologists, and have come to the hard decision that members of Congress should not plan to travel to Milwaukee,“ Chasseny Lewis, a senior adviser to the convention committee, wrote in an email to congressional aides. “No delegates will travel to Milwaukee, and Caucus and Council meetings will take place virtually.”

The Democrat convention announcement came on the evening when Biden, the presumptive Democratic nominee, would have been delivering his acceptance speech for the nomination, underscoring how profoundly the coronavirus has upended the campaign.

Earlier this year, shortly after the spread of the virus shut down many states across the country, the Democratic National Committee postponed its event by a month.

Traditionally, conventions have marked the start of the heated autumn campaign season, giving parties a chance to energise their supporters and sway undecided voters with days of pageantry and largely uninterrupted media coverage.

The development comes at a time when several Indian states are imposing focused lockdowns to stem the outbreak amid frantic efforts by local governments to protect the economy. So far, three states — Maharashtra, Delhi and Tamil Nadu — have accounted for more than half of total cases. But in India’s vast countryside, which is much less prepared and with weaker health care, the pandemic is clearly growing. The continuing surge has forced authorities to reinstate lockdowns in some cities and states.

Coronavirus infections in Brazil no longer appear to be rising exponentially but the country is “still in the middle of this fight” as new cases and deaths grow by thousands every day, the World Health Organisation (WHO) said on Friday.

Brazil, at the epicentre of Latin America’s growing epidemic, on Thursday passed the mark of 2 million confirmed Covid-19 cases, amid growing anger over president Jair Bolsonaro’s handling of the outbreak.

Only the United States has more infections worldwide.

“What’s not happening yet is that the disease has not turned, and is not heading down the mountain. From that perspective, the numbers have stabilised but what they haven’t done is started to fall in a systematic day-by-day way,” he told a news conference.

“So Brazil is still very much in the middle of this fight,” he said.

The reproduction or “R” - the number of people each infected person goes on to infect - now appeared to be between 0.5 and 1.5 across states in Brazil, Ryan said, down from more than 2 just weeks ago. “There is an opportunity once those numbers have stabilised to drive transmission downwards. I think that opportunity exists now for Brazil to do that,” he said. “But it is going to take a very sustained, concerted action in order for that to occur.”

Some 11 percent of all infections in Brazil are among health workers, he said.

Brazil on Thursday passed the 2 million confirmed coronavirus cases mark, with little sign that the rate of increase is slowing as anger grows over president Jair Bolsonaro’s handling of the outbreak.

Brazil, the largest country in Latin America, is home to around 210 million people – roughly two-thirds the size of the US population.

A recent spike in coronavirus cases in Canada is worrying and can be linked to groups of young people gathering in bars and nightclubs and at parties, a top medical official said on Friday.

“When we examine recent trends in case reporting, there is some cause for concern. After a period of steady decline, daily case counts have started to rise,” Howard Njoo, the deputy chief public health officer, told a briefing.

The daily case count rose to an average of 350 over the last week up from 300 a day earlier in July, Mr Njoo said. More than 430 cases were reported on Thursday.

“This coincides with increasing reports of individuals contracting Covid-19 at parties, nightclubs and bars as well as increasing rates of transmission among young Canadians,” Mr Njoo said.

“Singing, mingling and dancing in close contact with others in closed spaces and crowded places is not the way to party this summer. These are ideal conditions for the spread of Covid-19.”

France on Friday reported 836 new confirmed cases of Covid-19 within 24 hours to stand at 174,674, amid rising concerns over renewed flare-ups of the epidemic.

The number of deaths in France from the new coronavirus rose to 30,152 on Friday from 30,138 on Thursday, the country’s health department said on Friday.

The number of people in hospital with the illness fell to 6,688 from 6,796 on Thursday, continuing a weeks-long downtrend.–Reuters/New York Times/Guardian